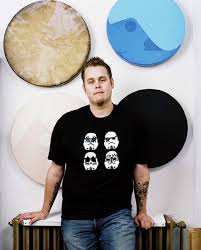 
First Nations contemporary artist, Sonny Assu was raised in North Delta, over 250 km from his ancestral home on Vancouver Island. It wasn't until he was 8 years old that he discovered his Kwakwaka'wakw heritage, which later became the conceptual focus of his art practice. He graduated from Emily Carr University in 2002 and began creating work that merged the aesthetics of Indigenous iconography with a pop-art sensibility. He uses a variety of mediums including large scale installations, sculpture, photography, printmaking and painting. His work is in collections around the world, including: the National Gallery of Canada, Seattle Art Museum, Vancouver Art Gallery, the Museum of Anthropology at UBC, Audain Art Museum and the Art Gallery of Greater Victoria. IN 2016, Assu and his family moved "home" to the Kwakwaka'wakw's unceded territory in Campbell River.