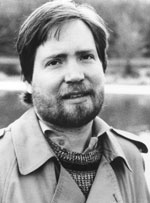 
Mel Atkey was born in Vancouver. He had a two-year stint as Georgia Straight theatre critic in 1981-82. His first musical Shikara was broadcast on radio in Toronto in 1988. He wrote music and lyrics for an adaptation of Willa Cather's Oh Pioneers presented at Producer's Club II in New York in 1991, and wrote the score for a musical version of A Little Princess.

Mel Atkey's A Million Miles from Broadway - Musical Theatre Beyond New York and London explores musical theatre that arose beyond Broadway, and "Not the many franchised versions of Fiddler on the Roof and Grease that have played everywhere from Tel Aviv to Abu Dabi, but indigenous musical theatre created in places other than New York by people other than New Yorkers and drawing on traditions other than just those of Broadway."

The opening sentence of Mel Atkey's memoir about what happens when people from different cultures try to work together, Running Away With the Circus (Friendlysong $16.95) is: If some clairvoyant had told me that I'd be spending my nights in a shipping container in Taiwan, guarding seven tigers, six Chihuahuas, five bears, four sea lions, three geese, two horses and a 'killer dog' named Ludwig, I'd have said "You're supposed to read the tea leaves, not smoke them."; The subtitle is: "Now is the Winter of Our Missing Tent."

When We Both Got to Heaven: James Atkey Among the Anishnabek at Colpoy's Bay (Toronto: Natural Heritage Books, 2002).

Articles: 2 Articles for this author
When We Both Got To Heaven
Promotional Copy


When We Both Got to Heaven tells the story of James Atkey (1805-68), who, with his wife Jane and their seven children came from the Isle of Wight to Canada in 1854. In 1855, they went to Colpoy's Bay, near Owen Sound on the shores of Lake Huron, where he taught school to the Ojibwa children. The book also tells of the surrender by the Ojibwa of the Saugeen (Bruce) Peninsula, using detailed accounts from the Public Record Office.

After thirteen years of research which has taken me to the archives of the Methodist Church in London, the United Church in Toronto and the British Library, in addition to the national archives of both Britain and Canada, I have written a 164 page illustrated booklet entitled When We Both Got to Heaven which tells the story of James and the first nations people for whom he laboured. You will read how James overcame persecution and even stoning in the Isle of Wight and learned to survive in the wilds of Canada in a place where he didn't know the language. You will hear why he and his family were held hostage for six hours when they first arrived in Colpoy's Bay. Were the people savage, as he had been taught to believe? Or did this have something to do with the manner in which their land was being surrendered? You will read of James' father Isaac's meeting with John Wesley, the founder of Methodism, and of their cousin the Dairyman's Daughter, whose life story sold over two million copies in its day. You will also learn about Kahkewaquonaby, the Indian missionary whose work was to shape much of James' later life.

About When We Both Got to Heaven, Dr. Donald Smith, Professor of History at the University of Calgary and author of Sacred Feathers - the Rev. Peter Jones (Kahkewaquonaby) and the Mississauga Indians, wrote "I was always confused by the nature of the Congregationalist missionary outreach to the Indians on the Bruce Peninsula -- your booklet has clarified a great deal." Destinations and Discoveries magazine wrote: "Great period flavour... tinged with touches of humour... A compelling read." When We Both Got to Heaven is published by Natural Heritage Books, price $21.95. It can be ordered through selected bookstores, or by contacting Natural Heritage Books


The year 2006 may well prove to be the year of the Canadian musical, according to author and composer Mel Atkey, whose book Broadway North: The Dream of
a Canadian Musical Theatre will be published by Natural Heritage Books, Toronto. Britain's New Statesman recently commented on "the Canadian duo Lisa Lambert and Greg Morrison, who swept the board at June's Tony Awards with The Drowsy Chaperone."; With a Canadian hit running on Broadway, more eyes focus on Canada. Could it be that the future of the musical theatre lies with the Great White North?

It's hard to predict, but according to Atkey, there have been encouraging signs. Da Kink in My Hair is about to open in London, and Rob Roy just had a successful première in Edinburgh. Toronto's Script Lab, under the direction of Jim Betts, has made a three-year commitment to developing new musicals. CanStage has, in the past decade, presented such serious works as Pélagie, Outrageous!, Larry's Party and The House of Martin Guerre. The latter show's creator, Leslie Arden-a protégé of Broadway maestro Stephen Sondheim-appears poised for an international breakthrough. Atkey contends that, just as writers need to study the works of the Broadway "greats,"; it is also essential to be aware of their own heritage. He is a musical theatre writer himself-he has presented his work in London and New York, where the New York Times praised his "lovely music."; He set out to do just that, and Broadway North is the result of his research. Atkey looks at the shows we know (Anne of Green Gables, Billy Bishop Goes to War) and the ones we don't (Mr. Scrooge, Sunshine Town, Baker Street). He also explores the efforts to create an indigenous musical theatre, beginning with Spring Thaw, the annual revue that ran for a quarter century, begetting both Air Farce and the Charlottetown Festival. Throughout the text, Canadian musical personalities and
little-known stories dominate the pages.