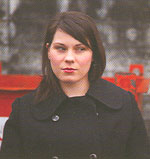 
Of Ukrainian and Irish descent, Elizabeth Bachinsky was born in Regina in 1976 and came to British Columbia in 1980. Raised in Prince George and Maple Ridge, she has an MFA in Creative Writing at UBC.

As a poetry editor of Event magazine and a letterpress apprentice with Barbarian Press, Elizabeth Bachinsky published Home of Sudden Service (Nightwood, 2006) after Sometimes Boys Go Missing and Curio: Grotesques and Satires for the Media Age (Bookthug, 2005).

Home of Sudden Service was followed by God of Missed Connections (Nightwood, 2009), a multi-faceted book that chiefly explores her Ukrainian background. No clear indication of the subject matter is made in the packaging of the book. The poems are often strikingly original, candid and also exploratory. Although married with a child, Bachinksky is unafraid to divulge her impressionable nature as a seeker of truth, rather than as a professor of truth.

Elizabeth Bachinsky has been nominated for the Bronwen Wallace Award for Poetry, the Pat Lowther Award and a Governor-General's Award. After she became an instructor of creative writing at Douglas College in New Westminster, she became editor of the college's Event magazine in 2013.


A slight book that packs a wallop of teenage angst, boredom and risky sexiness, this collection is set in the back seats on the back roads of Mission, Cultus Lake and all those roads that end at Hope. It's an unusual and highly accomplished use of form by a young poet on the subject of loose girls and the freeway culture of malls, necking, cruelty and tragedy. Elizabeth Bachinsky demonstrates more skill in a couple of sonnets and villanelles than poets twice her age do in a couple of books. She writes: "Your faults are mine and mine / yours. When we kiss, you light my vacancy. / yours is the trailer park fire of the mind, / a vinyl-sided wet dream.";

About her teen love of horses, growing up in Maple Ridge, Bachinsky writes:
"Is it possible that such a beast can swim? / He weighs a ton (at least) but here / he is, his expectant ears pricked forward, / forward, as he glides through murk. / The trees have made room for us, / surround our sounds, the sounds of girls / swimming with horses. / How far we are from the town. / How we animate ourselves.";

Not all of the numerous teenage moms and dads in the Fraser Valley feel stuck; there's the kids in the title poem who awkwardly work it out, hesitant. But for every one of those tentative "gonna-make it"; kids, there are teenage moms at the Valley Mall who know pregnancy means "his loving is over.";

A chilling poem called "Wolf Lake"; recounts the rape and murder of a teenage girl in the victim's voice, so poignant because the lake where her body is dumped is the place where she and the murderer used to swim as teenagers.
"This boy / I'd camped with every summer since we were twelve, /the lake so quiet you could hear the sound / of a heron skim the water at dusk, or the sound / of a boy breathing."; Most striking in this explicit collection is the contrast between the accomplished technique and the harsh realities of life voiced in colloquial language. The poet betrays herself; posing as a tough girl with a smart-ass mouth, she unwittingly reveals the sensitivity required for finely tuned writing. Miss Fraser Valley gets out of her tacky gear and turns out to be an Alice Munro in poet guise. 0-88971-212-3


Vancouver poet Elizabeth Bachinsky has been shortlisted for Canada's premier literary award for her sophomore collection Home of Sudden Service (Nightwood Editions, $16.95). "I started to shake when I realized I was on the shortlist,"; said Bachinsky in an early-morning phone call from her home. "I don't know how I am going to go to work and mark papers for the rest of the day. To be nominated for the Governor General's award is an incredible honour, especially since I am sharing the shortlist with writers like John Pass and Sharon Thesen.";

Bachinsky's work has been described as "smart-ass"; and "tough"; by acclaimed poets Gary Geddes and Stan Dragland, but they also note her ability to portray her characters with tenderness and true technical prowess. Geddes writes that Bachinsky "...knows not only how to hot-wire and fine-tune a poem, but also how to provide just the right blend of sound, image, and torque to make it move.";

Set in Anyvalley, North America, Home of Sudden Service centres on the experiences of young people growing up in the suburbs. The contrast of elegant poetic forms with the colloquial, often harsh, language of suburban teens makes for a startling and compelling collection of punk rock villanelles and delinquent sonnets. Murder, lust, teen pregnancy and a young man's disappearance are all discussed with a matter-of-fact, dispassionate voice.

Elizabeth Bachinsky was born in Regina, Saskatchewan, and grew up in Prince George and Maple Ridge, BC. Her work has been published in numerous literary journals and she is also the author of a chapbook, Sometimes Boys Go Missing and Curio: Grotesques and Satires for the Media Age. Bachinsky received an honourable mention for the Bronwen Wallace Award for Poetry and was shortlisted for the 3-Day Novel Writing Contest in 2004. She received a scholarship to the Banff Writing Studio in 2005 and has an MFA in Creative Writing from the University of British Columbia. She lives in Vancouver, BC.


"There is no one definition of what it is to be Ukrainian,"; writes poet Elizabeth Bachinsky in her multi-faceted God of Missed Connections (Nightwood $17.95). "It's not a new story, nor an unknown one, but there are over one million persons who claim Ukrainian heritage living in Canada today.";

Suspecting many of her generation don't know historical truths pertaining to Ukrainians in both the Old Country and life in Canada, Bachinsky has shared her exploratory self-education in her third collection of poems. Possibly to avoid typecasting as an ethnic writer, there is no clear indication of the subject matter in the packaging of the book.

Bachinsky is unafraid to divulge her impressionable nature as a seeker of truth, rather than a professor of it. Many poems are strikingly original, candid; others can be coy, opaque. At her best, Bachinsky is a shining example of how poetry can be more uplifting and revelatory than prose. Even a simple SkyTrain ride can be a passport to entering history.

I was ten years old the year Chernobyl burned,
the same year that Expo '86
came to Vancouver and the city changed forever.
For I will always think of China, the China pavilion
to be exact, each time these years later I pass
the China Gate at Dr. Sun Yat-Sen's Classical
Chinese Gardens. We are moving then, all of us,
from one place to another. Now, I'm haunted
by the SkyTrain doors' perfect open fifth
then the smooth electronic contralto programmed
to reassure as one rides the Expo Line to Waterfront
Station. The line stretches out behind us: concrete
contrails left over from '86. Eighty-six,
the year Chernobyl burned hot as the centre
of the earth, the sun, and men hurried in.