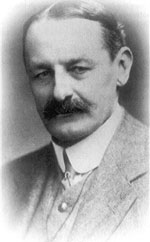 
Born in 1851, the 'great white hunter' William Adolph Baillie-Grohman was an explorer and adventurer who extolled the beauty of the Rocky and Kootenay Mountains. A hunting companion of future U.S. president Teddy Roosevelt, Baillie-Grohman persuaded American and English engineers to approve his plan to divert the Kootenay River at Canal Flats into Columbia Lake to allow for the development of the Creston Valley for agriculture. He also gained an appointment for himself as justice of the peace in the area and convinced Victoria to provide him with large land grants if his scheme proved feasible. He returned from England with a dismantled steamer, the Midge, which was used on Kootenay Lake until 1894, but his scheme became increasingly complicated and costly when the federal government decreed he must construct a lock to control the surges of water. With Chinese immigrant labour, he reclaimed land in the Creston-Canal Flats region by building a 14-metre-wide canal, three metres deep, for 2,000 metres, that diverted the Kootenay River into the Columbia River at Columbia Lake. The canal was completed in 1889 but the federal government ordered closure of the locks during the period when Baillie-Grohman wanted them open. Only two boats ever passed through his man-made waterway, one in 1894 and another in 1902. Something of a wheeler-dealer, Baillie-Grohman was indirectly involved in the grant of some 73,025 acres of agricultural and forest land to the Kootenay Syndicate Limited by producing promotional materials for a settlement scheme, but he never made his fortune. He also made some attempts to become a mining entrepreneur. He founded the village of Grohman, now known as Canal Flats, but he eventually returned to England in 1894, resettling in his family's ancestral home in Austria in 1919. William Adolph Baillie-Grohman died in 1921.

Most of the 77 photographs in Fifteen Years' Sport and Life in the Hunting Grounds of Western America and British Columbia (London: Horace Cox, 1900) celebrate big game hunting. One chapter was written by his wife. This book is noteworthy because it contains a yet-to-be-substantiated report that pioneer botanist David Douglas was the founder of B.C.'s mining industry because he "sent a specimen or two of the glittering ore home with is report. In 1831 these and other samples were assayed and their low grade established."

Camps In The Rockies: Being A Narrative of Life On The Frontier and Sport in the Rocky Mountains, With an Account of the Cattle Ranches of the West, With an Original Map Based on the Most Recent U.S. Government Survey (New York: Scribner, 1882)