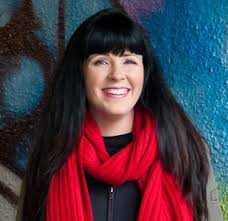 
Carleigh Baker is a Métis/Icelandic writer who was born and raised on the traditional, ancestral, unceded territory of the Stó:lō people. As a Vancouverite, she has produced a batch of stories with uncomfortable, unexpected and outright strange endings for Bad Endings (Anvil, 2017).  She told CBC: "My mom always used to say to me when I was a teenager, 'Carleigh, you're bad at endings.' It was because I'd avoid getting out of a situation that I was unhappy with until the situation was apocalyptic. She was joking when she said that, but she was right. Initially I thought since the end of my marriage propelled a lot of the stories in this book, I wanted to call it Bad At Endings. My publisher suggested Bad Endings because it's a little snappier." While her stories are full of character digressions, bad decisions, and misconceptions, she also highlights nature appreciation. "Salmon, bees and rivers play re-occurring roles. At times, the animals and humans merge, adding a touch of magic realism." This collection won the City of Vancouver Book Award in 2017, a prize, funded by the City's Publishing Reserve, established in 1977 as a legacy for Vancouver writers and publishers.

Baker was a writer-in-residence at Pierre Berton House writer-in-residence in 2019 and became a writer-in-residence for Simon Fraser University's English Department in 2020. Her novel-in-progress, The Matriarchs, will examine problematic relationships with mothers. Her protagonist takes a canoe trip inspired by a trip Baker took on the Peel Watershed in the Yukon when the area was under threat from mining, drilling and road construction. Her work has appeared in subTerrain, PRISM International, Joyland, and This Magazine. She won the Lush Triumphant award for short fiction in 2012, and was nominated for the Journey Prize in 2014. Her book reviews and critical writing have appeared in The Globe & Mail, Malahat Review, The Goose and EVENT magazine.