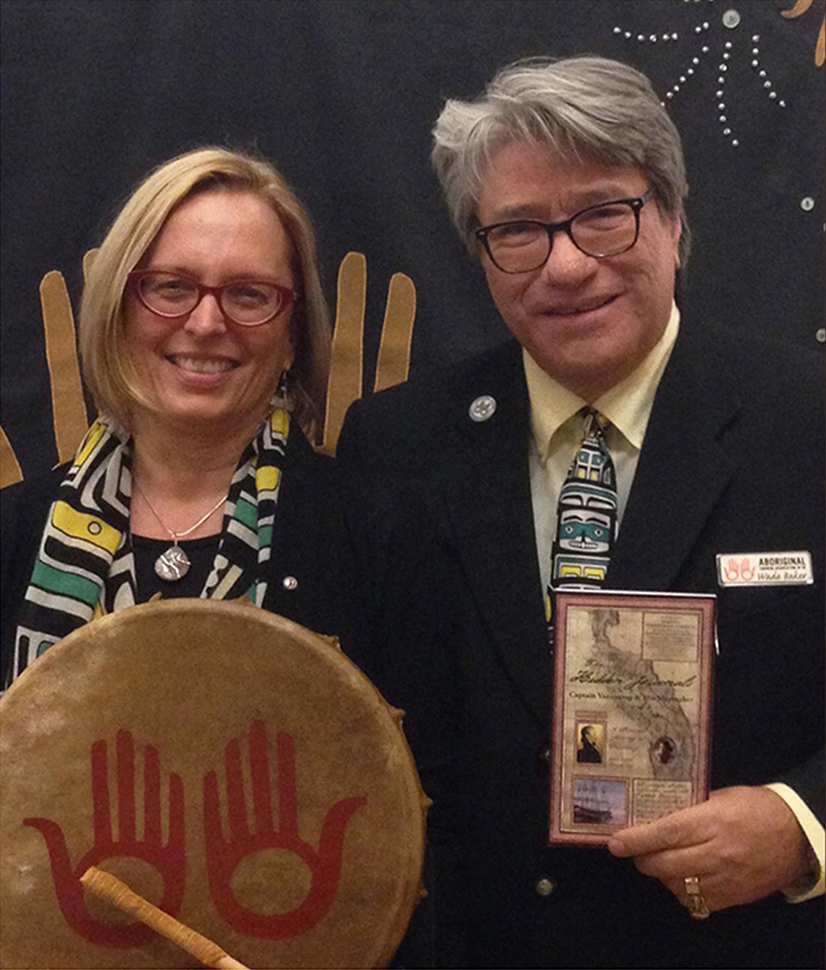 
Mary Tasi of Sky Spirit Studio and her studio partner Wade Baker, a descendant of three royal First Nations lineages, have co-written The Hidden Journals: Captain Vancouver and his Mapmaker (Sky Spirit 2015 $20) in an attempt to prove there was a marriage between the mapmaker on HMS Discovery, Lt. Joseph Baker-namesake for Mt. Baker-and the daughter of Chief Qeyupulenuxw in 1792-and also to substantiate Wade Baker's claim to be a descendant of Lt. Baker.

The pair visited archives in B.C., London, and Maui to examine primary source material relating to the voyages of Captain Vancouver, and came to the conclusion that Vancouver's original journal was purposefully hidden, and many passages relating to social interactions between British officers and Indigenous people were edited before the journals were published.

The pair also reference logbooks, drawings and oral stories. Much credence is given to the contemporary memories of First Nations and Hawaiian elders. While the evidence for Baker's family background is far from definitive, their book does constructively provide an alternate viewpoint as to why Captain Vancouver was discredited by the Lords of the Admiralty after he returned to England in 1795. With the sponsorship of Neptune Bulk Terminals and Port Metro Vancouver, the authors arranged to have one thousand copies of their book donated to North Shore high schools. 9780993843815

Articles: 1 Article for this author
Vancouver and his Mapmaker
Review (2017)

This book is not a scholarly study, but Wade Baker and Mary Tasi have accomplished something that many scholars would trade their tenure to do. They have unearthed both written and oral history that challenges our conceptions of early social interactions between Indigenous people and Europeans.

The book takes the reader on an intensely personal journey, from British Columbia to London to Hawaii. Wade's family name is our first clue as to how personal this story is. The first chapter begins with the words, "That's our mountain."; quoting Daniel Baker, Wade's father, speaking in 1967 as he pointed out Mount Baker to his children. Captain George Vancouver named the mountain for his mapmaker, 3rd Lieutenant Joseph Baker of HMS Discovery, in April of 1792. The research that led to this book is an attempt to find corroborating written and oral evidence for the story that had been passed down in Wade's family, that the modern-day Bakers of the Squamish Nation in British Columbia are descendants of Lt. Baker and a Coast Salish woman, probably a daughter of Chief Capilano.

The second chapter sets up the central argument of the book. A chance visit to a museum in Maui pits the traditional history of the British naval officers, offered by the museum guide, "... the officers stayed on the ship. There was no socializing with the locals."; against the oral history of Coast Salish elders, as reported by Mary Tasi, "Oral history I have received from elders is that [Lt. Baker] had a son he left in Vancouver and also here on Maui."; The tension between the official version and the oral history is what kept the original journals hidden and made the authors' research an exercise in sleuthing.

The stories of European - Indigenous relationships were hidden from both sides. The British Admiralty did not condone liaisons with the locals by its officers, and it took pains to expunge any references to such activities from the official records. Neither the Indigenous people of Hawaii nor of the Northwest Coast spoke easily of the liaisons, and the children thereof, to outsiders, because the missionaries had taught them that non-monogamous relationships were wrong. The authors had to search in unusual places for their evidence. One such unusual, and delightful, source is the journal of Madame Rose, who stowed away on her husband's ship, which left France in 1817 for a three-year voyage of exploration. Madame Rose wrote, "I do not regret hiding myself on my husband's ship ... it was the best time of my life."; This woman's journal describes much more of the social interactions with the Indigenous people of Hawaii, which the men usually left out of their journals. A sketch in the journal shows young Hawaiian men wearing officers' jackets; the men may have been sons of the officers of the 1790s expeditions, who by that time were able to fit the jackets their fathers had left behind. The weight of all the written and oral research done by Baker and Tasi is convincing, and points the way for more research to be done.

The book is written in a "folksy"; style, including descriptions of meals eaten between research sessions and personal interactions with elders and archivists - not a typical scholarly approach. At several points, after reading a particularly bold assertion, I found myself wishing for a footnote with sources. But perhaps Baker and Tasi's approach is quite appropriate. After all, their research was about discovering the personal stories that were left out of the official accounts. They accomplished what they set out to do, and their book is a fascinating and, yes, a refreshing read.

Mike Starr (M.A. Canadian Studies, Trent 1992), wrote a thesis on using primary source literature in heritage interpretation. That led him into Parks Canada, where he has spent 24 years as an interpreter, planner, and manager at three different national historic sites. This year (2017) he is retiring from the public service and devoting more time to writing and editing. Contact him at mike@prose-star.ca