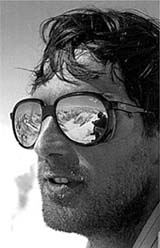 
John Baldwin, a Vancouver mountaineer and nature photographer with over 250 first ascents to his credit over a forty-year period, has pioneered more than a dozen long ski traverses in remote areas of the Coast Mountains, having literally skied from Bella Coola to Vancouver.

His co-authored Soul of Wilderness (Harbour 2015) is a collection of 166 full colour photos and essays featuring the wild beauty of western British Columbia and Alaska.

He is also the author of Exploring the Coast Mountains on Skis and Backcountry Whistler, and his award-winning photographs have appeared in numerous publications, including Beautiful British Columbia, Climbing, Powder, and Sierra. When not climbing mountains he works as a researcher in civil engineering at the University of British Columbia.

Mountains of the Coast: Photographs of Remote Corners of the Coast Mountains [Harbour 1999], which was shortlisted for the Bill Duthie Booksellers' Choice Award for British Columbia's best book in 1999.

Articles: 1 Article for this author
Mountains of the Coast: Photographs of Remote Corners of the Coast Mountains (Harbour $36.95)
Article


John Baldwin is too modest. The unassuming mountaineer and nature photographer has logged more than 250 ascents and is the first person to traverse the Coastal Range from Bella Coola to Vancouver on skis. That's 800 kilometres and ten years of snaking over mountaintops and glaciers. With his skiing partner John Clark, Baldwin has achieved as much or more than anyone in the Coast Ranges according to fellow back country explorer Anders Ourom. His adventures have made him worthy of legendary status among B.C.'s foremost mountaineers, but he would never say so.

Baldwin credits his mother with teaching him to see beauty and his father for nudging him to explore. In Mountains of the Coast: Photographs of Remote Corners of the Coast Mountains (Harbour $36.95) he lets his images do most of the talking, using his lens to transform ice, rock, snow, light and shadow into something otherworldly.

"As you ski,"; he says during our interview, "you get swept into the rhythm of the place and notice all these patterns and weird shapes. It's like discovering little nuggets of gold in a sand bar. You come around a corner and there'll be this incredible swirl around a crevasse and the morning light will be just right. It's abstract language on a huge scale.";

The Coastal Mountains are dangerous, even lethal. Three of Baldwin's colleagues died in 1996 when they were trapped in an avalanche on the Monarch Icefield. As well, many of his excursions are extremely taxing, both mentally and physically. Some trips last up to three weeks, requiring careful plotting to avoid icefalls and avalanches, or special preparations to cope with gales that can pin skiers inside a tent for days.

Since Baldwin's journeys allow him to carry only a week's rations, airdrops can be necessary. In one case a grizzly bear arrived at the drop before Baldwin. Every last morsel was devoured, right down to the canned food. The bear had managed to puncture the tins with its teeth, sucking them dry. "There wasn't even a whiff of tuna left,"; he says.

There's a documentary quality to some of his photos, underlining the requirements of surviving in vertical terrain. In a two-page panorama, Serra II of the Waddington Range pricks the sky like a needle, set against a backdrop of peaks so numerous that most are nameless. A tiny figure, on the scale of a gnat, clings to Serra II's grey pinnacle. This scene, with the Tiedemann Glacier yawning 2,000 metres below, is vertigo defined.

The vast reservoir of wilderness stretching 1,500 kilometres from Vancouver to Alaska has pulled Baldwin back into its mystery for 25 years now. He says his sense of discovery has yet to diminish. He's drawn by "the simple, uncomplicated enjoyment of nature and its hidden treasures... It is the silence, the mist hanging over our jagged peaks, the curve of the snow slopes as they recede into the distance."; 0-55017-213-1