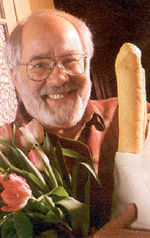 
"Cooking, like sex and dancing, is a pleasure best shared." -- James Barber

"Cooking is the simplest way of saying I love you." -- James Barber

Born in the U.K. in 1923, James Barber immigrated to Canada in 1952 having served in the Royal Air Force during the war. He worked as an engineer before becoming a food writer and critic at the Vancouver Sun, first turning his hand to freelance writing after a skiing accident. Also a Vancouver Sun arts columnist and theatre critic, he appeared on television commercials as the spokesperson for Money's Mushrooms, acted on The Beachcombers and served as the Dairy Farmer's Milk Calendar 'cover boy' for four years. He was a longtime restaurant critic for Georgia Straight and a successful television chef. His ten-year-long CBC TV show called The Urban Peasant was syndicated around the world. He wrote several bestselling cookbooks, most significantly Ginger Tea Makes Friends (1971), an important bestseller in the evolution of J.J. Douglas Ltd., later known as Douglas & McIntyre. Barber was president of the Vancouver immigrant society, MOSAIC, and the Vancouver Folk Music Festival Society. His career as the 'urban peasant' began in the early 1970s after complications from a leg infection put him into a body cast; no longer able to work as an engineer, he was divorced soon afterwards and moved into a bachelor room, with a frypan. A longtime Vancouverite, who re-married to Christina Burridge, he relocated to a twelve-acre farm at Cobble Hill near Duncan, B.C. in the Cowichan Valley. He died in November, 2007. Known for his Rabelaisian wit, he also wrote a whimsical children's book, Once Upon Anne Elephant There Was a Time. The Genius of James Barber (Harbour, 2008) contains tributes and recipes from other B.C. chefs who admired him, as well as Barber's "best" recipes.