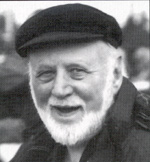 
"It's only a forty-minute ferry ride from Horseshoe Bay, but we might as well be in Alaska." -- Terry Barker

In 1998, artist Terry Barker began contributing an irregular column to the Coast Independent newspaper on the Sunshine Coast, sketching local landmarks and buildings to accompany background material on each site. The combination of these articles were revised and expanded for Sunshine Sketches: An Artist's History of B.C.'s Beautiful Sunshine Coast (self-published, 2001) to serve as a celebration of the area from Port Mellon to Egmont. He continued this series with two more volumes.

His other books include Last Chance This Life, A Hundred Letters, a collection of his letters to his drug-addicted son living on Vancouver's Downtown East Side. His bestselling titles are Boss Talk and The Five Minute Police Officer [see below].

Two Old Broads and Other Poems is Barker's eighth book, a lifetime of his poetry condensed into a 64-page chapbook.

He writes, "I always believed that you shouldn't self-publish unless you have a buying audience in mind. I published Boss Talk when I was lecturing on communication skills for managers at two universities and my students had to buy the damn thing. It took on a life of its own and sold 30,000 copies in four editions and two continents and is still active on line. Later, I lectured for the RCMP and wrote The Five Minute Police Officer as a guide to handling difficult people. Cops needed this stuff. It sold over 10,000 and still does well as an ebook. When I became a well-known columnist here on the Coast I could publish my Sunshine Sketches books and advertise them in my column. All these books had specific markets in mind. The last two are exceptions, just books I really wanted to write, so I printed fewer copies and sell them myself as a labour of love only at the Farmers Market, where I've had a booth for 12 years.

"Terry is proud of the fact that he was one of the first authors in Canada to self-publish. He wrote Boss Talk, his first venture, in 1983, using a Radio Shack TRS-80 computer and a dot-matrix printer. Primitive by today's standards, but so revolutionary in its day that he was the subject of several astonished TV and radio interviews. "We don't need publishers any more!"; he announced. "Now we are free!"; He has continued on that vein, wanting complete control of the subject matter and appearance of his work."

Two Old Broads and Other Poems