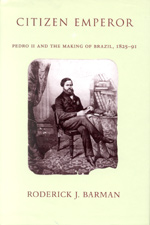 With Jean Barman, "The Role of the Law Graduate in the Political Elite of Imperial Brazil," Journal of InterAmerican Studies and World Affairs 18, n. 4 (November 1974), 423-50.

Articles: 2 Articles for this author
Princess Isabel of Brazil
Info


UBC historian Roderick J. Barman's Princess Isabel of Brazil: Gender and Power in the Nineteenth Century (Scholarly Resources $19.95) follows the Stanford Press publications of Brazil: The Forging of a Nation, 1798-1852 and Citizen Emperor: Pedro II and the Making of Brazil, 1825-1891. Barman provokes a feminist consideration of Isabel's life as heir to the Brazilian throne from 1851 to 1889. The Princess held rare female political power, governing the country while her father was abroad and sponsoring legislation to end slavery. Barman is continuing scholarly work on the history of Brazil. 0-8420-2846
-[BCBW AUTUMN 2002]


It's not likely to appear as an answer on Who Wants To Be A Millionaire or Jeopardy but the most successful ruler in the Americas, in terms of longevity, isn't the macho megalomaniac Fidel Castro (41 years), the Paraguayan dictator General Alfredo Stroessner (35 years) or Canada's longest-serving prime minister, Sir Wilfrid Laurier (15 years).
It was Pedro II.

According to the constitution, Emperor Pedro was the 'perpetual defender of Brazil... by the grace of God and the unanimous acclamation of the people.' But it was no picnic at the top. Pedro II's two sons died and as a descendant of the ruling houses of Europe, Pedro II had to overcome generations of in-breeding, childhood epilepsy, his abandonment by a weak and irresponsible father and the suffocating company of unctuous subordinates.

"I am always forced to watch what I say and what I do,"; he wrote, "and can never be spontaneous.";

Trapped in an increasingly loveless and sexless marriage, Pedro II retreated into a self-centred pursuit of reason, eschewing passion. He increasingly viewed the monarchy as a social obligation rather than as a self-glorifying vehicle for power and prestige.

"Pedro II's avoidance, virtual fear, of intimacy with other humans,"; says Roderick Barman in Citizen Emperor (Stanford $55 US), "sprang from a dread, acquired during his childhood, of the betrayal and abandonment that such contact might bring...

"In writing, Pedro II found an acceptable substitute for conversation... The image of Pedro II sitting alone in his study immersed in reading and writing catches the essence of the man. Throughout the length of his reign, he never depended on a personal secretary.";

Self-described as bear-like in behaviour but attracted to lofty ideals, Pedro II forged his own sober belief in material progress and conservative institutions for Brazil. He venerated literature and knowledge-learning Hebrew, Arabic, Sanskrit and Tupi-Guarani -and believed education was the most solid basis for the civilization of a country.

"I have a justice-loving soul,"; he wrote.

In Citizen Emperor, Barman argues that the overthrow of Pedro II by a bloodless military coup in 1889 has unfairly dominated posterity's view of him. Exiled to Paris, the Brazilian-born monarch died in Paris in 1891. "He was invariably courteous, kind and patient,"; says Barman. "He kept his emotions under iron discipline. He was never rude and never lost his temper. He was exceptionally discreet in words and cautious in action. Equally notable was his loyalty to the status quo, both in respect to people and to institutions.";

Conservatives, in a nutshell, get a bad rap. Barman, a UBC history professor and author of Brazil, The Forging of a Nation, 1798 -1853 (Stanford) cites Pedro II's calm tenacity, his constant willingness to forgive and forget and his all-encompassing kindliness. "These very qualities,"; says Barman, "also explain why it is all too easy to underestimate his achievements."; 0-8047-3510-7