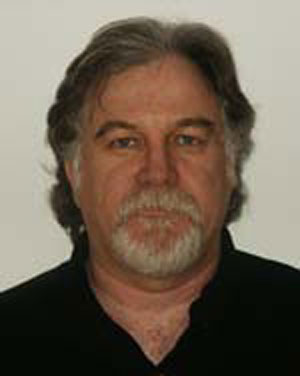 
A Kootenay School of Writing collective member and former Talonbooks employee, Michael Barnholden moved to Vancouver in 1970, served as the director of the Sunshine Coast Festival of the Written Arts in Sechelt for one year and returned to Vancouver where he founded a book review periodical called The Rain Review of Books in 2003.

Born in Moose Jaw, Michael Barnholden became fascinated with the Riel Rebellion period in general, and Riel's military leader Gabriel Dumont (1838-1906) in particular, leading to his translations for Gabriel Dumont Speaks (Talonbooks, 1993) [See below] and a collection of rare photographs of battles that occurred in Saskatchewan that led to Louis Riel's surrender [See below]. He has also published a book of poetry, On The Ropes, and co-edited a Kootenay School of Writing anthology, Writing Class, with Andrew Klobucar.

According to historian Chuck Davis, the first riot in Vancouver occurred in 1887 when a white mob wrecked a Chinese camp in False Creek, enraged because Chinese laborers willing to accept 75 cents per day, were undercutting white laborers' attempts to establish $2 per day as the going rate. Subsequent public demonstrations accompanied by property damage (real or imaginary) and police presence beyond the ordinary is the subject for Barnholden's Reading the Riot Act: A Brief History of Riots in Vancouver (Anvil $18). Barnholden's sympathies are with the vanquished as he reveals how eyewitness reports and testimonies are often at variance with media reports-whether it's the Gastown Riot of 1971, the APEC demonstrations of 1997, the Stanley Cup riot of 1994, the Grey Cup riots of 1963 and 1966, or the renowned Post Office and Art Gallery occupations of 1935. "Every city has its distinct history of rioting,"; he says. "... I decided to pursue the subject after the APEC riots made it clear that the local political economy was ignored in favour of a 'bad apple' explanation, which only further obscured the causes and events leading up to the riot."; Barnholden proposes an equivalent of the London Riot Re-enactment Society in order to stage re-enactments that will make historical events live again. His roster of riots includes the Anti-Asian riots of 1907, the B.C. Penitentiary riots of 1934 and 1938, the Rolling Stones riot of 1972, the Guns 'n' Roses riot of 2002 and the Punk Rock riot of 2004.

Barnholden wrote the text to accompany the photos of Nancy Newman for Street Stories: 100 Years of Homelessness in Vancouver (Anvil 2007), a collaborative work of photographs, interviews, and and essays on homelessness and poverty in Vancouver. This book draws on the artistic, advocacy and social work expertise of its contributors in light of the increases in homelessness regularly associated with hosting the Olympics.


FOUND IN THE NATIONAL ARCHIVES in 1971 by Michael Barnholden, the memoirs of Louis Riel's "agitant-general" have been translated and published for the first time in Gabriel Dumont Speaks (Talonbooks $11.95). "To find Dumont's account is like striking gold," says Barnholden, "There are many accounts that exist but they're mostly from the victor's side or from Riel's perspective." Dumont dictated his memoirs to a group of friends in 1903, 18 years after the second Riel Rebellion, but the documentation lay undiscovered as part of L 'Union Nationale Metisse de Saint-Joseph collection. The Metis military leader recalls events leading up to the 'Rebellion' and describes his view of the fighting. For many years Barnholden wasn't sure how to present Dumont's recollections. Working as an editor on Write It On Your Heart by storyteller Harry Robinson finally convinced Barnholden to "let the oral historian speak". Also newly published is a collection of 21 essays, Riel to Reform (Fifth House $16.95), edited by George Melnyk, which examines the roots of Western Canadian alienation. Dumont 0-88922-323-8

In 1903, eighteen years after leading the Métis Army against the Northwest Expeditionary Force and the Northwest Mounted Police at Fish Creek, Duck Lake and Batoche, Louis Riel's Adjutant General Gabriel Dumont dictated his memoirs to a group of friends, one of whom is thought to have written Dumont's stories out in longhand during that epic meeting. This manuscript languished unseen and unpublished in the Manitoba Provincial Archives as part of L'Union nationale métisse de Saint-Joseph collection until its discovery there by Michael Barnholden in 1971. Now re-translated into English, it preserves the record of an unrepeatable oral recital, off ering us a rare opportunity to view one of the central events in the history of the Métis in a new context: as perceived by one of their key heroes.

Like Riel, Dumont put the interest of his people ahead of his own. Although he could neither read nor write, he was an eloquent speaker, sought after to defend Métis rights both in Canada and the United States throughout the 1880s and 1890s. Known to have spoken Blackfoot, Sioux, Crow, Cree, French and English, Dumont dictated his memoir in "incipient Michif,"; thought to be his first language: using Cree syntax and some verbs, with a vocabulary that was primarily French.

Dumont's first-person account of the details of his early life, leading up to the events variously referred to as the Riel Rebellion, the Northwest Rebellion or the War of 1885, provide a third reading of the "Rebellion"; from the point of view of its military leader, as well as many personal, cultural and historical revelations worthy of examination. In addition, Dumont's sheer strength of narrative carries these decisive events with a conviction, drama and suspense that only the tradition of oral history can deliver.

And you might also want to know the first battlefield photos ever taken under fire are, believe it or not, Canadian.

While suppressing the so-called Northwest Rebellion in 1885, and doubling as a correspondent for the Quebec Morning Chronicle, Captain James Peters of the Royal Canadian Artillery's 'A' Battery took more than 70 photos of the Saskatchewan battles at Fish Creek, Duck Lake and Batoche (on the banks of the South Saskatchewan River), including a rare image of the Métis leader Louis Riel as a prisoner.

Michael Barnholden has showcased these eerie images for the first time in their entirety in Circumstances Alter Photographs: Captain James Peters' Reports from the War of 1885 (Talon $35).

According to Barnholden, these photos, neglected for more than 120 years, document "the moment when the 18-year-old country of Canada turned away from becoming a Métis Nation by declaring war on its own people.";

To record Riel's defeat as well as the subsequent campaign to subjugate Metis and First Nations forces under Big Bear, Poundmaker and Miserable Man, Captain Peters was taking advantage of new technology. In 1883, "naturalist"; or "detective"; cameras came on the market that enabled the likes of Peters to carry a camera over his shoulder.

Hand-held photography became viable with faster shutter speeds. As well, James' camera used coated plates that did not require preparation and could be stored for later development.

"For the live rebels,"; he wrote, "I generally, for fear of fogging, took them from a distance, as far and as quickly as possible. All these little contrivances, and many more are necessary when one is trying to take a portrait of an ungrateful enemy.

"Numbers of my plates are under-timed; but I am not particular. Those taken when the enemy had surrendered, and were unarmed, made better negatives, but 'circumstances alter photographs.'";


Following a rebel victory masterminded by Gabriel Dumont at Fish Lake, some 300 Métis and Indians led by Louis Riel and Gabriel Dumont held off a force of 800 men commanded by Major-General Middleton between May 9 and 12, 1885. Riel was captured and hanged later that same year, but Dumont escaped via Cypress Hills to Montana where he surrendered to the U.S. Calvary.

Released as a political prisoner, Dumont joined Buffalo Bill's Wild West show as a celebrity and marksman. Historians have suggested Riel might have been victorious if he had given permission to Dumont to enact his plans for guerrilla tactics, such as destroying railway tracks.

Long fascinated with Dumont, Barnholden has produced a new edition of Gabriel Dumont Speaks (Talon $16.95) featuring his new translation of memoirs that Dumont dictated in 1903, as well a new introduction, a Métis Historical Timeline and some new images.

Barnholden first began working on his Gabriel Dumont book-which has led him to reproduce the little-known photography of Captain Peters-back in the early 1970s.


Michael Barnholden’s discovery of a previously unknown text by Louis Riel—a poem written in the Regina jail just before his execution—has led to Flat Willow Creek: The Poems of Louis Riel, 1878–1883 (Talon $19.95) which includes the 481-line epic “To Sir John A.” and other poems written when Riel lived the traditional life of a Métis buffalo hunter and developed his concept of a “New Nation” for the Métis people.