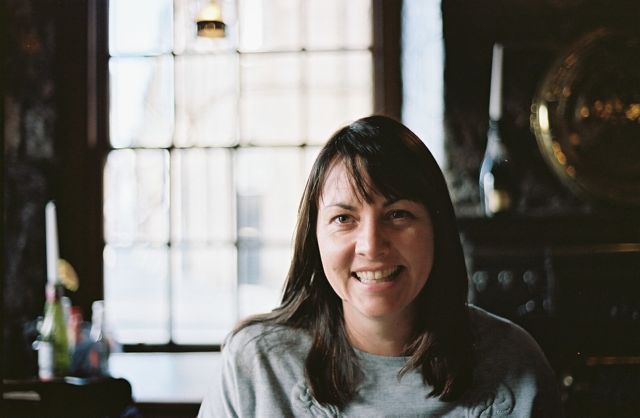 
Jackie Bateman commenced her trilogy of thrillers about a suspected serial killer named Oliver with the oddly titled Nondescript Rambunctious (Anvil, 2011). The novel gets its name from a secret club called NondescriptRambunctious.com that is managed by the Scottish suspect.

Bateman continued to explore "sociopathic depravity" and contemporary society's desensitization to violence with Savour (Anvil 2014), a second novel that has the predacious Oliver tracking a young woman named Lizzy who has fled to London from Scotland to start her life anew. Trying to put drugs, crime and the disappearance of her mother behind her, Lizzy is unaware she has become the focus for Oliver's attention. "She belongs to him now, as he battles with his need to protect her - and the burning desire to take her soul."

Jackie Bateman was born in England but had a nomadic childhood in Kenya, "with a smattering of Nigeria and Malawi in between." She came to Vancouver in 2003 and lives on the North Shore with her family. Her first novel Nondescript Rambunctious has been translated into Dutch.

In the diverse genre of suspense writing, North Vancouver's Jackie Bateman offers us Straight Circles, the final book in her Lizzy Trilogy set in Scotland, a grim inspection of domestic abuse, child neglect and murder. This is hard-boiled suspense despite the clever insertion of a cozy knitting shop in the fictional Scottish town of Dalbegie where winter is setting in and "it's Baltic out there,"; as one landlady aptly puts it.

It will come as no surprise to fans of these well-written novels-albeit deeply chilling at several levels-who also favour gritty British and Nordic Noir television mystery series (okay, full disclosure, rabid fans like my own self) that the Lizzy Trilogy has been optioned for a TV series. I can only hope they get the production values, and the terrific writing and acting chops, of the Cardinal series, based on the acclaimed police procedural novels by Giles Blunt, also a Canadian.

Jackie Bateman obviously knows her suspense writing formulas and sub-genres and skillfully applies cracking good dialogue and just the right amount of Scottish dialect, a deft hand at pacing and acutely observant descriptive powers. She uses four main narrators to tell this story, dipping us in and out of their heads, while ratcheting up the tension to nearly unbearable levels. Former runaway Lizzy is the main narrator, newly pregnant and on a quest to find out what happened to her mother nearly two decades earlier when she simply disappeared from bleak Dalbegie.

Not one, but two serial killers reveal their plans in their respective chapters and what's worse, they have more than a passing acquaintance with each other. Oliver is an obsessive man, forever cleaning himself and his surroundings, using bleach and scalding hot water. He must wear a hat to conceal the damage he's done to his own scalp. Oliver, an early computer user, has discovered a way to monetize his murderous urges which led Helen to him some years before. Helen began life as one of the crawling wounded, quite literally the twin given up for adoption as a baby. She has been wreaking her random vengeance on the rest of the world ever since, in a creepily convincing portrayal of the terminally jealous and forever-angry sibling who refuses to let go of real and imagined childhood grievances.
Helen, squat and heavyset, favours a bowl-cut hairdo, and works full-time in a cat shelter in Edinburgh, where her anti-social and smelly self is avoided by co-workers and strangers alike. The cats are safe. People, randomly chosen, are most certainly not. Unhappily for Lizzy, and a few others, Helen has decided to take her two week vacation in Dalbegie where she continues to compete with Oliver, whether he knows it or not.

The other most frequent narrator of the main foursome is Lauren, the ghost of Lizzy's mother. In Bateman's hands, this does not present a credibility issue. In fact, some of the best writing in the book comes from the point of view of this hovering other-worldly mother, offering wisdom and warning, unheard in death and often ignored in life, the lot of mothers to wayward daughters the world over:

Beautiful things shouldn't be hidden away.

We think the things that are precious to us will somehow bring us luck, and it's not true. Even the real necklace didn't do me any favours. Look at me now. But if you want to live the fairy story, just this once, you deserve to be in it. God knows, we all need to live in our minds once in a while, as long as we're stuck on earth. Stick the chain in your pocket, touch it once in a while, and make believe it's looking after you.
Because right now, no one else is.";

Just as in real life, the thoughts and actions of damaged and dangerous people do not need to "make sense"; and Bateman shows how prevalent vicious behaviour is, especially when fuelled by drugs, alcohol and morbid projections triggered by a voice, a laugh, a briefcase. Being in the wrong place at the wrong time has never made sense but usually we call these occasions by the more benign term, 'accidents.' Not so in Dalbegie, where the author returns to her Scottish roots and pungently evokes the townsfolk's hard drinking, deep-fried diets and penchant for spreading malicious gossip. Like all first-rate mystery writers, Bateman is keenly aware of societal ills and provides an especially gritty depiction of addictions and the damage done, especially to grubby, malnourished children left to fend for themselves far too much of the time.

Helping others, as Lizzy instinctively does, makes most of us feel more fully connected to other humans because kindness and empathy expand the heart, put simply and metaphorically, not medically. Whereas harming others makes some of us, like Oliver and Helen, feel more powerful, whether the target is a tiny child, a timid wife, or an unsuspecting healthy young male hiker. The book does not dwell on their depravity much less revel in it but their character development is an uncanny blend of what onlookers might recognize in an external, superficial way, e.g., "that pale man with the hat"; or "that dumpy woman in the long overcoat,"; and the internal, or psychological, blind spots experienced by these creatures. They are prisoners of their own obsessions and ultimately, they lack crucial elements of self-control and self-awareness, which readers will see revealed by the novel's conclusion. There are black holes in their psyches where souls ought to be, to channel Granny Mac, an off-page, long-dead character who dwells securely in the hearts and minds of her generations of offspring, especially Lauren and Lizzy.

Every single character, major and minor, among the watchful eyes on Dalbegie's High Street or in the overgrown back yards of the side streets, plays a memorable role and the good and generous nature of small towns is revealed as well in a very satisfying ending to this book and the Lizzy Trilogy. The first two novels in the trilogy also published by Vancouver's Anvil Press, are Nondescript Rambunctious (2011) and Savour (2014). 978-1-77214-114-6

Review by Caroline Woodward who's novel, Alaska Highway Two-Step, first published by Polestar Press in 1993, was nominated for the Arthur Ellis Best First Mystery Award by the Crime Writers of Canada. It was re-published by Harbour Publishing in 2017.

Articles: 1 Article for this author
Savour: The Obsessions of a Murderer by Jackie Bateman (Anvil Press $20.00)
Review (2015)


At sixteen, lizzy has been through a lot. When she was twelve, her mother disappeared and no one else wanted Lizzy. At thirteen, she took off for London with her boyfriend, leaving Dalbegie, Scotland. Nobody reported her missing.

On the streets of London, Lizzy knows how to handle herself and keeps a close eye on her less streetwise friend, Natalie, as they work their Soho fruit stalls.
One of the nasty people in Dalbegie has followed Lizzy to London. Both protector and predator, Oliver is a sociopathic serial killer who is obsessed with Lizzy as he had been obsessed with her mother.
That's the setup for Jackie Bateman's Savour: The Obsessions of a Murderer, Bateman's follow-up to Nondescript Rambunctious (Anvil, 2011), Book One in her Lizzy Trilogy. The first novel won the SFU Writer's Studio First Book Competition.
Both novels explore sociopathic depravity and contemporary society's desensitization to violence.

With time and wealth on his hands, Oliver is a stalker who organizes "viewings"; for a select group of psychopaths, including Helen, who knew Oliver from Dalbegie. They both worked at, of all things, a cat rescue facility. Helen is about to get a surprise from Steve, an amiable loser capable of murder.

In Savour, rank-smelling alleys are festooned with human waste and vomit. We visit hovels where the city's castaway derelicts live. Worse, we are dragged into Helens and Oliver's minds.

"I wanted to make Oliver complex in that he likes order and control,"; says Bateman. "He feels that he owns Lizzy, has power over her, and doesn't want anyone else to have her. He battles with this paradox where he wants to kill her-but at the same time, to protect her.

"Oliver likes the feeling he gets from killing and that kind of person is the worst kind, because they never get found.";
Such nefariousness is not entirely fanciful. When Bateman lived in Edinburgh, there was an extremely violent incident in the flat below her.

"When the police came,"; she recalls, "they asked if I was okay and what I was doing there. I didn't know what they meant-but they said if I knew who else was living in my street, I would be packing up and moving. That stuck with me. Do you really know your neighbours?";

Because Savour deals with such a young protagonist and there is a surprising lack of any sexual references-given its dark subject matter-this book could have been aimed at a youth market, but Bateman says it's definitely adult fiction. "It's a touch too dark and full of swearing to be categorized as YA,"; she says, "although I can see older teenagers enjoying my novels because of Lizzy.

"Something terrible happening in life can result in devastating consequences. We've all seen it happen to someone we know, someone's daughter, to a friend-or to ourselves. It resonates no matter how old we are.";

As with its predecessor, Savour comfortably slips between four narrators, Lizzy, Helen, Steve and Oliver, but only Oliver speaks out in the first person. We begin to observe Lizzy, for example, from his eyes. We're forced into his head.
The final installment of the trilogy, Straight Circles, could be available next year. Meanwhile her entire trilogy will be translated and published in the Netherlands and France later this year.