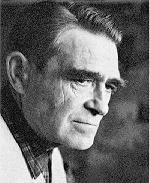 
Painter Maxwell Bates is one of the few soldiers who survived both the infamous "long march" of Allied prisoners into Germany at the fall of France and the equally notorious march out of Germany before the advancing Allied troops in 1945. In A Wilderness of Days he recalls those wartime experiences and the five years in a prisoner-of-war camp. ISBN 0-919462-56-1

Bates was born in Calgary, Alberta in 1906. He studied at the Provincial Institute of Technology in Calgary under Lars Haukness. By the end of the twenties he and his friend Roy Stevenson were, according to R. L. Bloore "the most advanced painters in Western Canada." He spent the years 1931-1939 in London, exhibiting regularly with the Twenties Group. As a member of the British Expeditionary Force sent to France in 1940 he was captured by the Germans and was interned in a prison camp from 1940-1945. Returning to Calgary in 1946 he worked as an architect before coming to Victoria, B.C., in 1961. His work has been exhibited in London, Paris, Tokyo, Mexico City, Manchester, Auckland, Philadelphia and all major Canadian cities. Retrospective exhibitions of his work were held in Regina and Edmonton (1960-61), Victoria (1966), Winnipeg (1968) and Vancouver (1973). He has received many awards for his painting and is a Fellow of the International Institute of Arts and Letters and a member of the Royal Canadian Academy. He received an Honorary Doctorate from the University of Calgary in 1971. [SONO NIS]