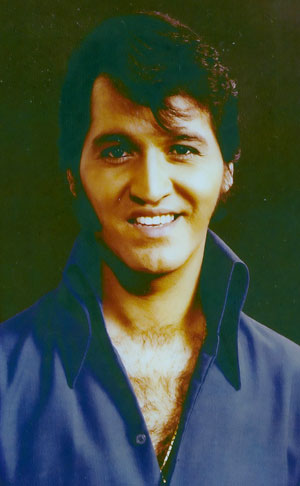 
It's hard enough for a bass player from a bar band in Vancouver or Calgary to end up as highly-paid headliner in Las Vegas for fifteen years, but Morris Bates did it from Williams Lake's Sugar Cane Indian Reservation after his foster parents Pascal and Phyllis Bates had first lived with him in a rustic cabin near Horsefly Lake. The Williams Lake First Nation (WLFN), also known as the T'exelcemc, claim to have belonged to the Secwepemc (or Shuswap) Nation for over 6500 years.

Elvis look-a-like, Morris Bates, easily one of the world's foremost Elvis impersonators, tells it like it was in Morris as Elvis: Take A Chance on Life (Fox /Quarry $34.95 2010) an amply illustrated memoir, co-written with Jim Brown.

Bates' mother Lillian, a Shuswap, was impregnated in 1949 by a handsome Haida while she was in Port Edward, employed at the fish cannery. "During the Williams Lake Stampede in the summer of 1950," he says, "my mom went down to the Ranch Hotel and left me outside in my baby carriage. She went into the bar and left me there. Many hours later I was 'up to my neck in shit' and Phyllis and Pascal came out of the bar and found me and took me to their home."

It sounds like a tale from Charles Dickens. Bates began touring Western Canada with his own Injun Joe's Medicine Show, never listening much to Elvis until 1968. Changing his act to Canada's Tribute To Elvis, then changing it to A World Tribute to Elvis, the kid from Williams Lake eventually graduated to The Cave nightclub in Vancouver where he made $10,000 in three nights.

Bates never knew his father until his mid-forties, after Bates struck it big as one of Las Vegas' most durable attractions. Having played everywhere from the Mad Trapper's Lounge in Inuvik, to a South African stage with Otis Redding, to an appearance on the Merv Griffin Show, Bates ultimately felt his white Elvis jump-suit turning into a strait-jacket.

Once an electrifying performer who rubbed shoulders with the stars, Bates gravitated to work as a counselor in Vancouver's Downtown Eastside. He has also conducted Reality Check for Indigenous People programs to help First Nations kids stay off drugs and alcohol.

Review of the author's work by BC Studies:
Morris as Elvis: Take a Chance on Life