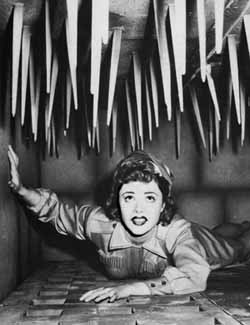 
The distinction of being Vancouver's first native-born novelist goes to Alfred Batson, born in 1900. As an infant he probably lived at 1142 Hornby Street, an address listed in a turn-of-the-century directory as the residence of C.F. Batson, a ships's chandler.

Alfred Batson grew up in Boston, Massachusetts where he attended Harvard but he served in the Canadian army in World War I. He then fought as a captain with the rebel forces in Nicaragua until U.S. Marines re-established control and he was forced to flee overland to Mexico. Also known as 'Red' Batson, he wrote extensively for Argosy magazine, chiefly adventure stories that were sometimes adapted for movie plots.

Batson's best known-novel is African Intrigue (Garden City Publishing 1933), an account of Franco-German rivalry in Africa. The story concerns an expedition headed by four unnamed men sent into French West Africa by Germany in 1911. The conflict emphasizes that native peoples invariably suffer most when two international powers battle for territory.

Batson was one of six screenwriters credited for Republic Pictures serial called Jungle Girl (1941) starring heartthrob Frances Gifford. This movie was shown in cinemas in 15 episodes, directed by William Witney and John English. The cast included Tom Neal, Trevor Bardette, Gerald Mohr, Eddie Acuff, Frank Lackteen, and Tommy Cook. A doctor in the jungle is murdered by his evil identical twin who assumes his brother's identity to search for nearby diamonds. The physician's daughter, Nyoka Meredith, must outwit her duplicitous uncle and Shamba, the equally nasty witch doctor. This story was adapted by Batson and at five other credited writers from Edgar Rice Burroughs' 1932 novel The Land of Hidden Men. It, in turn, had evolved from a novel Burroughs started to write in 1929 that appeared in Blue Book Magazine as The Dancing Girl of the Leper King. The story of Jungle Girl was transferred from 'a remote Cambodian jungle' to Africa. Nyoka reputedly means "snake" in Swahili. The lead character--an archetypical precursor to Laura Croft and Tomb Raider--reappears in a sequel as Nyoka Gordon, probably to evade a lawsuit.

In Perils of Nyoka (1942), once again Nyoka's father is an altruistic medical man who is stalked by an identical twin brother named Slick, only this time much of the action occurs in the desert--and this time everyone is after the lost tablets of Hippocrates that will provide a cure for cancer. When Slick arrives on the scene, Nyoka, this time played by Kay Aldridge, must save her father, by dangling precariously over bubbling lava, surviving a deadly wind tunnel, etc. She fights the wicked temptress Vultura and her pet gorilla Satan, and kills men with deadly marksmanship while dressed fetchingly in khaki big-game-hunter clothes. One of the 'Masamba' tribesmen is a Toronto Indian actor named Jay Silverheels, later famous in the Lone Ranger TV series as Tonto. All of which would be worthy of only a footnote were it not for the fact that George Lucas and Steven Spielberg studied this Saturday matinee action movie before making Raiders of the Lost Ark.