In 2021, Dr. Marie Battiste joined Cape Breton University as Special Advisor to the Vice President Academic and to Unama’ki College on decolonizing the academy. She is a Mi’kmaw educator of the Potlotek First Nation in Cape Breton, Professor Emerita at the University of Saskatchewan, a 2019 Pierre Elliott Trudeau Foundation Fellow, and an Honorary Officer of the Order of Canada. Her interests in "decolonizing education, protecting Indigenous knowledge, cognitive justice through balancing diverse knowledge systems and languages" have led to graduate degrees from Harvard and Stanford Universities, as well as four honorary degrees from the University of Ottawa, University of Maine, St. Mary’s University and Thompson Rivers University in B.C.  She partnered with UBC historian Jean Barman to co-edit First Nations Education in Canada: The Circle Unfolds (1994) and later edited Reclaiming Indigenous Voice and Vision (1999) and co-wrote Protecting Indigenous Knowledge and Heritage: A Global Challenge (2000) with her husband James Youngblood Henderson, a Harvard-educated law professor who was born to the Bear Clan of the Chickasaw Nation and Cheyenne Tribe in Oklahoma in 1944. 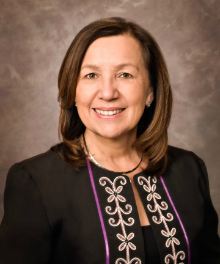 Review of the author's work by BC Studies:
Reclaiming Indigenous Voice and Vision