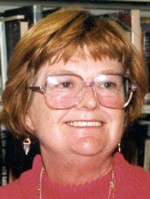 
To recognize the plight of the homeless in British Columbia, Sheila Baxter wrote Under the Viaduct (New Star, 1991), the first book to receive the VanCity Book Prize for best book pertaining to women's issues by a British Columbian. It publicized the lives of her neighbours who were living in Skid Road hotels, under bridges and on the streets.

Born in 1933, Sheila Baxter is a self-described 'literacy guerilla' who has been involved in poverty issues since 1970. In Montreal she was a co-founder of Chez Doris, a drop-in centre for street women, and later, having raised five children, she volunteered as a counsellor and welfare advocate at the Downtown Eastside Women's Centre in Vancouver. A single working mother for many years, she has been on a handicapped pension due to a back injury since 1983.

As an anti-poverty activist, Baxter interviewed poor women in 1986 and published No Way to Live: Poor Women Speak Out. Her third book, A Child Is Not A Toy: Voices of Children in Poverty, was followed by another rallying cry, Still Raising Hell. It highlights community initiatives in the Downtown Eastside of Vancouver for improvements in health, education and housing, and some interviews with her activist colleagues. Baxter has tutored at the Carnegie Community Centre and she contributes to the Carnegie newsletter.

Sheila Baxter's play Death in a Dumpster (Lazara) was developed in St. John's Church / Friends for Life Mask Workshop and first performed by the West End Public Theatre on May 6, 2005 at St. John's United Church in Vancouver. Produced and directed by Ian Wallace, and featuring Baxter as a member of the cast, this fictionalized drama recalls the death of a homeless man who was crushed to death in a garbage dumpster. Having discovered he is HIV positive, Danny, a young fisherman from Nova Scotia, hitchhikes to Vancouver to find his mother, who abandoned him as a child.

Articles: 3 Articles for this author
The Heart of the Community (New Star $24)
Article


Larry Loyie has also contributed to The Heart of the Community (New Star $24), edited by Paul Taylor, an anthology gleaned from the pages of the Carnegie Centre newsletter begun in 1986.With contributions from writers such as Sandy Cameron, Sheila Baxter, Maxine Gadd, Diane Wood and Bud Osborn, its appearance coincides with the 100th anniversary of the building at Main & Hastings that serves as the Carnegie Centre. 0-921586-94-9

"In the old days in England," says Baxter, author of No Way To Live: Poor Women Speak Out (New Star $9.95), "Poor people would deliberately disable themselves so they would have the right to beg.

"Our welfare system here is still geared to those English Poor Laws. There's no incentive to get well. If a woman struggles to be healthy, she knows her cheque is going to be cut by $50. But if you crack up, if you have emotional or alcohol problems, you get more money."

Baxter's book presents women's natural voices, unedited and unanalysed, talking about how they survive. It also contains statistics from Canadian anti-poverty groups which claim 41% of all single women in Canada live below the poverty line, 82% of the elderly poor are women and 49% of all single-parent families headed by women are poor.

"Sickness is being encouraged because it's a sin in this society to be able bodied and not employed, even when there are no jobs available. Vander Zalm and Mulroney have that ethic. That's why I had to do this book. To let women at the bottom of the system have their say."

Death in a Dumpster
Press Release (2005)

Death in a Dumpster, a passion play for the homeless, will open at 8:00 p.m. on May 6th and 7th, in the sanctuary of St John's United Church, 1401 Comox Street, at Broughton, in the West End of Vancouver. Written by Sheila Baxter and directed by Ian A. Wallace, the play is based on a true event.

"Homeless man found dead in Burnaby dump. Apparently fell asleep in a dumpster, picked up and crushed with the garbage.";

This item, three lines in the newspaper, prompted Sheila Baxter, author of four books on homelessness and poverty, to write a new play, "Death in a Dumpster";. The play gives an identity and a spirit to anonymous street victims; through it, we participate in a memorial which celebrates Danny's young life and that of so many others who experience similar fates in the midst of our urban environment. "Death in a Dumpster"; invites us to look beyond the stigma and separation of "us and them"; and embrace the entire "human family";.

In the play we meet a street family... who loves, laughs, fights, parties, then mourns their friend Danny, who dies accidentally and tragically as so many homeless people do. This workshop presentation of the West End Public Theatre, St John's United Church and The Friends for Life Mask Group, was brought to life by a team of passionate, dedicated volunteers.