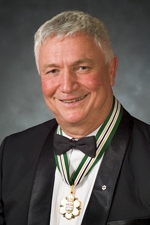 
Dick Beamish and Gordon McFarlane invited ten other experts to help them complete an unprecedented, 384-page book about the geology, biology and anthropology of the Strait of Georgia, illustrated by more than 250 colour photos, maps and charts. Beamish and McFarlane, as editors of The Sea Among Us: The Amazing Strait of Georgia (Harbour Publishing, $39.95), were awarded the American Fisheries Society's Haig-Brown Award that recognizes those who have produced outstanding, non-technical articles or publications on any aspect of fishery management, research, habitat protection, enhancement, or other related fields. Beamish and McFarlane received the honour during the 2015 Annual General Meeting of the Washington-British Columbia chapter of the American Fisheries Society, held February 16-19, 2015. The award came on the heels of a ten-week-long stint on the BC Bestseller list and a recent second printing due to high demand.

Dick Beamish O.B.C., C.M., Ph.D., F.R.S. is an Emeritus Scientist at the Pacific Biological Station in Nanaimo, BC. Beamish, one of the first people to write about climate regimes and regime shifts obtained his PhD. in Zoology from the University of Toronto in 1970, followed by a post-doctoral fellowship at Woods Hole Oceanographic Institute in Massachusetts. After a stint working with the Fresh Water Institute at the University of Manitoba, Beamish landed on the west coast in 1974. There, he continued his research into the effects of acid rain on fish, revolutionized ways to determine age and longevity in fish and worked to demonstrate how ocean climate affects fish stocks. Retired in 2011, Beamish, recipient of the Prix d' Excellence, the Queen's Golden and Diamond Jubilee Medals, the Order of Canada and the Order of British Columbia, was a member of the International Panel on Climate Change awarded the Nobel Peace Prize in 2007. He lives in Nanaimo with his wife Anne, and remains an active member of North Pacific Marine Science Organization (PICES).

Reviews of the author's work by BC Studies:
The Sea Among Us: The Strait of Georgia

Articles: 1 Article for this author
The Sea Among Us
Interview 2014

Dick Beamish arrived in B.C. in 1974 after breaking new ground as a 'co-discoverer' of acid rain in Ontario. It took 20 years for the science to be recognized and for governments to set new emission standards. He was also a member of the International Panel on Climate Change that received the Nobel Prize in 2007.

Sandy McFarlane has spent 30 years as an internationally recognized fisheries researcher, studying both individual species and how the marine ecosystem functions.

Together, as scientists at the Pacific Biological Research Station in Nanaimo, they invited ten other experts to help them complete an unprecedented, 384-page book about the geology, biology and anthropology of the Strait of Georgia, illustrated by more than 250 colour photos, maps and charts.

Mark Forsythe, former host of BC Almanac on CBC Radio, spoke with Dick Beamish and Sandy McFarlane the day their book was launched.


BCBW: You talk a lot about plankton in the book-and how much one degree of warming can affect the food chain supply...

BEAMISH: Plankton is probably the key to understanding what's going on with the Strait of Georgia. But you know this old issue: you can't manage what you can't measure. Sandy and I both feel that we need a lot better monitoring and measuring of plankton. It's just amazing how small changes in the environment affect plankton, which then affects all the other species.

BCBW: The Pacific Biological Research Station is a federally funded institution. Given the recent cutbacks, do we have the resources and people required to do what you're describing: to monitor the health of plankton? Or anything else in Georgia Strait?

BEAMISH. The short answer probably is no. But the amount of monitoring that needs to be done is probably beyond the ability of governments to afford. So you have to focus the money on the issues that scientists think are most critical. As you know, that's not always an easy thing to do.

BCBW: How should we be responding to the impact of open net cage fish farming on wild stocks?

MCFARLANE: I think the idea of having a moratorium [as recommended by the Cohen Commission] is probably a good one. All the evidence so far that I've seen is still pretty inconclusive, but it indicates that having those farms in those areas is not quite as bad as some people might think. We've given the aquaculture industry eight years to show us that, in fact, that statement is correct. And in those eight years there's been a moratorium; so there's been no new farms. That's probably a reasonable approach on the part of the government to address this issue because it's of huge concern to British Columbians.

BCBW: What do you see coming in terms of population expansion and industrial development around the strait?

MCFARLANE: I think the estimates right now are 75% of British Columbians live within 10 km of the Strait of Georgia and that is projected to double within the next 30 to 40 years. It's going to be a tremendous amount of new stress on the strait. More contaminants. There will be increases in marine traffic, no matter what.

BCBW: Obviously many people are concerned about increased tanker traffic and pipelines. So how well are we doing at taking what scientists know and putting that into the policies and political decisions that drive how we manage the Strait of Georgia?

MCFARLANE: In the past we made decisions based on this fish, or are we harming this particular this little area. We didn't look at it as a system. I think we're just beginning to take all the information we have and use it to assess the overall ecosystem.

BEAMISH: That's why the intent of the book is to provide people with the background information that exists scientifically. The experts volunteered their time. It's scientific information, but it's not written for scientists. It's understandable, and the kind of information that British Columbians need to have to make good decisions.

We are not going to stop all development. But the development that we do have, we want to make sure that there is an understanding of what impacts could be. And if there are impacts, they are going to be monitored and measured.

BCBW: So how would you rate the overall health of the strait?

BEAMISH: Well, first you have to gather background information from the people that have expertise, then you can start to decide not just what the health is, but also what the complexity is for stewardship.

MCFARLANE: You have to bring all parties to the same table. If they have a common understanding of how the actual ecosystem works, then you can be talking from the same baseline.

Mark Forsythe recently retired from CBC Radio and plans to spend more time exploring and writing about B.C. This transcript is an edited version of a longer conversation.

The Strait of Georgia now has the highest density of harbour seals in the world even though harbour seals were once hunted almost to extinction.

The world's largest octopus lives in its waters.

The strait's sandy beaches, up to 70 metres thick in some places, are made up of Quadra Sand deposited by meltwater streams from glaciers between 30,000 and 20,000 years ago.

11 species of marine mammals are found in the strait -- from orca to sea lions and porpoises. Pacific white-sided dolphins have returned after an absence of more than 100 years.

There are 223 marine fish species in the strait, with at least 350 marine plants.

The strait is critical habitat for millions of migratory birds.

Underwater landslides can generate tsunamis. In 1946 a fisherman was killed by a one metre wave while he was standing on the breakwater at the mouth of the Fraser River.

Coast Salish people have fished in the Strait of Georgia since 8,000 B.C.