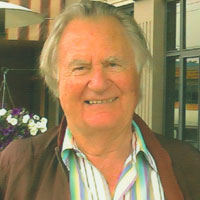 
Cyril Belshaw was born in New Zealand in 1921. With H.B. Hawthorn and S.M. Jamieson, he co-wrote The Indians of British Columbia (University of Toronto Press, 1958), an important survey for the government that contained some progressive suggestions that were not adopted.

As an economist with a Ph.D in social anthropology, Cyril Belshaw has written numerous books on economic anthropology and public policy, including Towers Besieged: The Dilemma of the Creative University (McClelland & Stewart, republished by Webzines of Vancouver in 2010), in which he argued that universities should primarily be for creative questioning rather than professional training, and Anatomy of a University (UBC Press). A Fellow of the Royal Society of Canada, he has also self-published Choosing our Destiny: Creating the Utopian World in the 21st Century (Xlibris Corporation, 2006) available from his home address: #2901 - 969 Richards St. Vancouver BC V6B 1A8.

After Belshaw was tried for the murder of his wife in Switzerland and acquitted, mystery novelist Ellen Godfrey wrote a 1981 study of the headline-grabbing case, By Reason of Doubt. Belshaw subsequently produced The Complete Good Dining Guide To Great Vancouver Restaurants (Harbour, 1984).

In 2005 he won the World Utopian Competition with essays which he later expanded into a book, Choosing our Destiny. He has also written his three-volume autobiography Remuera: Memories of a New Zealand Boy Between the Wars; Bumps on a Long Road: Essays from an Anthropologist's Memory Volumes I and II, available from Lulu.com. The latter two works are riddled with typographical errors, evidently unedited, but the second volume does provide his account of his fourteen months in French and Swiss prisons, "the peculiarities of the triall [sic]" and he "tells of on line and print publisheing [sic]."

Another Belshaw title is Fixing the World: An anthropologist Considers our Future: Anthropology, Holism, and Innovation Theory Provide Answers (Webzines of Vancouver 2010) 520 pages, US$40. ISBN 978-1-926820-05-7