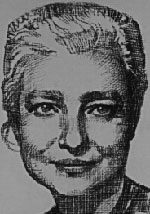 
With a preface by Margaret Mead, Ruth Fulton Benedict's wide-ranging Patterns of Culture (New York: Houghton Mifflin, 1934; Boston: Houghton Mifflin, 1961) was a bestseller. It contains inflammatory information on the Pacific Northwest, mainly about the Kwakiutl. Benedict's extrapolations, along with examples of Kwakiutl oratory, represented the potlatch as symptomatic of a Dionysian culture that encouraged megalomania. Her views were widely discussed and taken seriously. Born in New York City in 1887, Ruth Fulton graduated Phi Beta Kappa from Vassar College, lived in Europe with college friends, became a social worker in 1910, then a teacher until her 1914 marriage to biochemistry professor Stanley Benedict of Cornell Medical School. Courses at Columbia University and the New School for Social Research led her towards anthropology. She was editor of the Journal of American Folk-Lore from 1925 to 1940. She became the first woman to be promoted to a full professor of the Faculty of Political Science in 1948. From her extensive research with Indians of California and Arizona she wrote three books, Tales of the Cochiti Indians (1931), Patterns of Culture (1934) and ZuÃ¡i Mythology (1935). Her work with the Office of War Information in World War II led to her second bestseller, The Chrysanthemum and the Sword: Patterns of Japanese Culture (1946). She died in New York on September 17, 1948.