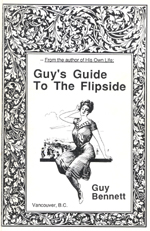 
Guy Bennett's Guy's Guide to the Flipside is an offbeat but acerbically truthful view of some of Vancouver's less-celebrated attractions. Self-published to critical acclaim in 1988, it was re-issued by Pulp Press in 1992. "I like the American (Hotel)," he wrote, "because everything I prize about myself is absolutely worthless there." The attraction of Bennett's guide to Vancouver's bars, eateries, dog grooming salons, funeral parlours, Woolworth's, The Young Bride's Shop etc. was chiefly the debut of a gifted writer with an uncensored critical mind. It is not a conventional guidebook as such.

Bennett was born in Cambridge, England in 1959 and came to Vancouver in 1968. After being an acting student and studying pre-med at Syracuse, New York, he worked briefly for Harbour Publishing before attending Norman Jewison's Centre for filmmaking in Toronto as a screenwriter in 1992. He has since produced a movie starring his daughter and he has written for film and television.