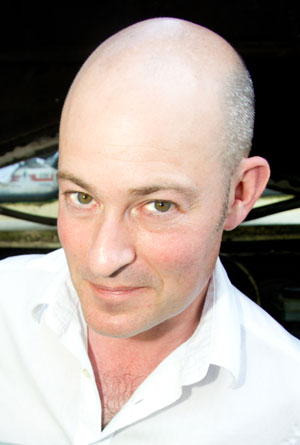 
After releasing six albums, Vancouver indie singer and accordion whizz Geoff Berner has crafted a Searching for Sugarman-like novel about the disappearance of a mysterious and charismatic female musician named DD. As the narrator in The Fiddler is a Good Woman (Dundurn $18.99) interviews her friends, ex-bandmates, ex-lovers and such, he amasses an increasingly diverse and puzzling portrait. The authenticity of the variable viewpoints is brought into doubt. The truth is not out there. Previously Berner published his first novel, Festival Man, and a graphic novel, We Are Going To Bremen To Be Musicians. 978-1-45973-708-2

Due to his insightful humour, politically inflammatory compositions and showmanship, Berner has gained a cult following over the years as a performer, especially in Canada and Norway, where he recorded his first live album, Live in Oslo (2004).


Travel in the entertaining company of a man made of equal parts bullshit and inspiration, in what is ultimately a twisted panegyric to the power of strange music to change people from the inside out. At turns funny and strangely sobering, this "found memoir" is a picaresque tale of inspired, heroic deceit, incompetence, and -- just possibly -- triumph. Follow the flailing escapades of maverick music manager Campbell Ouiniette at the Calgary Folk Festival, as he leaves a trail of empty liquor bottles, cigarette butts, bruised egos, and obliterated relationships behind him. His top headlining act has abandoned him for the Big Time. In a fit of self-delusion or pure genius (or perhaps a bit of both), Ouiniette devises an intricate scam, a last hurrah in an attempt to redeem himself in the eyes of his girlfriend, the music industry, and the rest of the world. He reveals his path of destruction in his own transparently self-justifying, expulsive, profane words, with digressions into the Edmonton hardcore punk rock scene, the Yugoslavian Civil War, and other epicentres of chaos.
Publisher