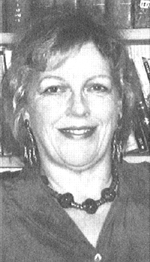 
Born and raised in England, Jo Beverley has a degree in English history, and moved to Canada in the mid-seventies with her scientist husband. She now lives in Victoria. She is the author of more than 30 published romances, both Regency and historical.

Jo Beverley is the recipient of numerous awards including the Golden Leaf, the Award of Excellence, the National Readers Choice and a two Career Achievement awards from Romantic Times. She is also a five-time winner of the RITA, the top award of the Romance Writers Of America, and a member of their Hall of Fame and Honor Roll. She is one of two authors selected to give major addresses to the national conference of RWA in New York in July, 2003. Beverley has regularly appeared on romance bestseller lists, including the NYT bestseller list. Lord of Midnight received a starred review in Publishers Weekly, and a Georgian novel, My Lady Notorious, has appeared on numerous lists of "best ever" romances. Beverley is one of the authors featured with profile and article in the reference book, North American Romance Authors, Ed. Kay Mussell and Johanna Tunon, Scarecrow Press, "...designed to highlight significant recent changes in the romance genre and to profile writers who have made North America the dominant geographic center for romance publishing."

2008 marked the 20th anniversary of her literary career and brought the release of a new novel, A Lady's Secret (NAL Penguin) as well as a double edition of her classic novels, entitled Lovers and Ladies (including The Fortune Hunter and Deirdre and Don Juan). In April of 2008 A Lady's Secret premiered at number 14 on the New York Times Bestseller List for fiction. Asked why she's never appeared on a Canadian bestseller list, Beverley says, "Unfortunately books by Canadian authors that are published in the US are often overlooked when sales my Canadian authors are counted here. Also, there's prejudice against mass market paperbacks, which are often ignored entirely, as if they're not really books. I assume the readers enjoying them know they're not
an illusion!"

Jo Beverley began writing stories at a young age and still has a medieval historical romance written in a school exercise book when she was a teenager. She began to apply herself seriously to writing in the mid-1980s. She completed a regency romance in 1985. It was promptly rejected by a number of publishers, and she settled more earnestly to learning the craft. In 1988, it sold to Walker, and was published as Lord Wraybourne's Betrothed. She is now a fulltime writer, writing novels set in her native England in three periods: the medieval, Georgian, and Regency. As well as novels, she has written romance novellas, and two Science Fiction stories. Her works have been selections of the Doubleday Book Club, and translated into many languages including Italian, Spanish, Chinese, German, and Norwegian. She is a lead author with New American Library, Penguin Putnam, New York.

Articles: 3 Articles for this author
Secrets of the Night (Topaz $8.99)
Info


Set in Yorkshire in the 1760's, Jo Beverley's new mass market paperback romance Secrets of the Night (Topaz $8.99) promises daring deceit and sensual adventure. An elderly husband's inability to provide an heir threatens his estate. Shy, young Rosamunde returns from a masquerade to kidnap and seduce a dashing young nobleman, Lord Malloren. Beverley, touted as a 'mistress of the sexy romp', lives in Victoria and is one B.C.'s bestselling novelists. 0-451-40847-0


Rosamunde Overton is a young Yorkshire wife with an 18th Century dilemma. Her husband, the much older Sir Digby Overton, is impotent and ailing-rich food and a fondness for brandy having taken their toll. Unless he and Rosamunde produce an heir, their family home and land will pass to Sir Digby's odious nephew. In the latest historical romance from Jo Beverley, Secrets of the Night (Topaz/Penguin Putnam $ 8.99), Rosamunde must find a man to "give her a tupping"; - and impregnate her.
But Rosamunde is out of her league when the virile stranger she finds - and falls in love with - turns out to be none other than Lord Brand Malloren, brother of the Marquess of Rothgar. Rosamunde becomes a pre-suffragette feminist when she discovers the joy of sex. When she is told she shouldn't be out at night because "all men are easily tempted,"; she retorts "Then perhaps men shouldn't be allowed out of the house at night."; Beverley lives in Victoria. 0-451-40847-0


The age-old friction of sexual conquest and surren der, the quest of a selfish man to spill himself inside a beautiful woman, disregarding fears of pregnancy-the inescapability of romantic tension-that's the focus of Jo Beverley's latest fantasy, A Lady's Secret, touted as a historical romance.

Although Beverley acquired an electronic library of books from the eighteenth century for research, A Lady's Secret contains few clues as to the exact era in which the seducer-an English nobleman who is travelling across France with two male servants in his private carriage-finally gains entry to his prey.

The love target is a beautiful woman fleeing from Italy, initially disguised as a nun named Sister Immaculata. It's the late 1760s but the politics of the day are largely irrelevant. It's sexual politics that hold sway on every page.

Our heroine Petra has spent years in a convent prior to the death of her widowed mother. She relucantly accepts a ride with the Earl of Huntersdown, a handsome cad who is merely seeking amusement during a long journey.

For about 200 pages he cajoles her with his wit, gradually wearing down her defences, while Petra is fleeing from evil pursuers, hoping to contact her real father in England who doesn't know she exists.

In return for his protection, he wants her body. They eventually do it furtively, for three pages, halfway through the book, aboard a ship crossing the English Channel:

They played, a joust of tongues and hot breath, then came together for the unavoidable kiss... "No! she gasped. He went still, rigid. She heard the silent plea. And surrendered. "Not no,"; she whispered in helpless, trembling surrender. "Yes, yes, please. Yes.

Jo Beverley is a highly skilled novelist, easily one of British Columbia's hottest selling authors. Anyone encountering her lively dialogue can understand why.

Jo Beverley has won five RITA awards. Her first Georgian novel, My Lady Notorious, appeared in 1993. A Lady's Secret is her eighth instalment in her ongoing series about the Malloren family.
Once again her fiction will not receive the recognition she deserves in Canada due to the genre of her work. Her web page is www.jobev.com.