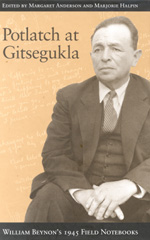 
William Beynon's name was first recorded in ethnographic literature in January of 1915 when Marius Barbeau wrote, "I am very fortunate in having gotten the services of Wm. Beynon, a very intelligent young half-breed Tsimshian, who proves more useful still in working directly with informants for me. He records myths quite successfully and with good speed.";

It would take another 85 years before Beynon's writing would appear in book form, fully credited, despite his prolific career sending field notes to Barbeau in Ottawa. The notebooks of William Beynon are often considered among the most significant written records of Northwest coast potlatching. They were published for the first time in Potlatch at Gitsegukla: William Beynon's 1945 Field Notebooks (2000) edited by Margaret Seguin Anderson and Marjorie Halpin.

Born in 1888 in Victoria to a Welsh father and Tsimshian mother, William Beynon had an extensive career as an ethnographer of Tsimshian, Nisga'a and Gitksan communities. His grandfather on his mother's side was Clah (aka Arthur Wellington) who taught the missionary William Duncan how to speak Tsimshian in 1857 and who has been credited with saving Duncan's life when he was held at gunpoint by the highest ranking chief of the Tsimshian.

Schooled in Victoria, William Beynon was the only one of six brothers who learned to speak Tsimshian from his mother. He didn't finish the equivalent of high school. After working for the Canadian Pacific Railway and the Department of Public Works, he went to Port Simpson for the funeral of his uncle, Albert Wellington, in 1913, and decided to stay among his mother's people.

In the 1920s, Beynon began sending his field notes to Barbeau in Ottawa. Considered the founder of folklore studies in Canada, Charles Marius Barbeau was a native of the Beauce region south of Quebec City who first came to British Columbia in 1914. He later played a significant role in the "discovery"; of Emily Carr by the fine arts establishment in Ontario. Although Barbeau incorrectly theorized that totem poles were only erected after contact with Europeans, he was one of the first ethnographers to attempt to document the accomplishments of individual Haida artists.

By 1948, Barbeau was paying Beynon $35 per notebook. Beynon otherwise supported himself by working in the fishing and canning industries of the north Pacific Coast. In 1945 Beynon observed, and participated in, two weeks of masked dramatizations and potlatching at the Gitksan village of Gitsegukla where the focus of the ceremonies was the raising of five totem poles, four by Houses of the Gisgahest (Fireweed) crest group and one by a House of the Laxsel (Frog) crest group.

By the time he died in 1958, Beynon had sent approximately 54 notebooks to Ontario between 1929 and 1956. The notebooks from 1945 were later edited by Margaret Seguin Anderson and Marjorie Halpin. In reference to the gathering at Gitsegukla they wrote, "We are left with a deep appreciation not only for the immense amount of work done by Beynon, but also for the profound debt owed to the elders of Gitsegukla, who saw so clearly that their ways are the continuing strength of their people and who, in 1945, brought the young people of their village from reluctant acquiescence in these events to a deeper awareness and celebration of their identity and heritage.";