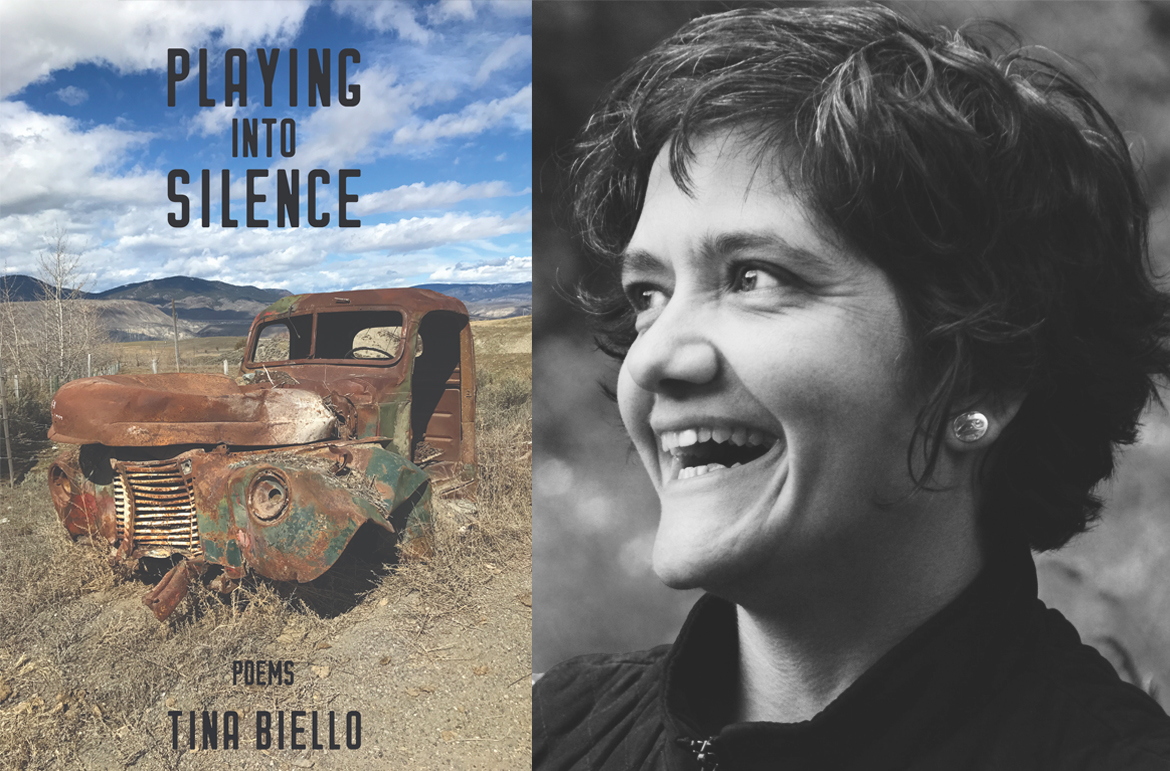 
Tina Biello of Lake Cowichan was raised on Vancouver Island by immigrant parents. She studied theatre at UBC. Her first full-length book of poetry, In the Bone Cracks of the Walls (Leaf Press, 2014), was shortlisted for the Bressani Prize and was part of a multi-disciplinary art exhibition of poetry, watercolour and music in Montreal, Vancouver, and Italy. Her second full-length book of poems, A Housecoat Remains, was published by Guernica Editions (2015). Playing Into Silence, was published with Caitlin Press' Dagger Editions. Set in the 50s and 60s in small-town Alberta, Playing Into Silence looks back at a dry time in lesbian identity. Tina Biello was appointed Poet Laureate for Nanaimo, 2017–2020.

Playing into Silence
by Tina Biello

Tina Biello’s two previous books of poetry, In the Bone Cracks of the Walls (Leaf Press Spring, 2014) and A Housecoat Remains (Guernica Editions, 2015) were frankly personal but we can’t be so sure about Playing into Silence,

For starters, the protagonist, Pam, is a generation older than the author. Whereas Pam’s hometown is Heisler, Alberta—a Prairie farming community—Tina Biello lives in Lake Cowichan—a Vancouver Island logging community.

Pam is sixteen in 1965. For a “normal” forbidden love she might have been sent to “visit an aunt” or in more severe cases to a reformatory. But homosexuality was something altogether different, definitely not normal, and she is consequently sent to the Ponoka Mental Hospital for the Insane.

She plays her saxophone to pass the time.
Indigo notes rise out of the bell, wrap their silky
song around the ears
of the women who sit drugged. A blue-eyed girl
in a wheelchair, in a corner suddenly
stands, waves her arms around like she wants
a partner to fill them, dance her
around the common room….

When the charge nurse takes her saxophone away,
she keeps on playing
into the silence, where the notes
are hers and hers alone.

And now it makes even more sense.

In the poem “Ponoka,” Pam is again in the common room with her saxophone, with a pack of cards for solitaire. The same girl in the wheelchair wheels herself over to Pam, touches her hair and then her saxophone.

Oh, you do want me to play.
My name is Pam.
What’s yours?

That’s Sheila. I wouldn’t talk to her
or you might find yourself with a black eye.

Nurse moves Sheila away from Pam.

I’ll decide what’s ok, dear. You just mind your own business
and keep your game of cards to yourself.

Part One of Playing into Silence is called “Childhood.” It follows Pam as a child during the unfolding of her sexual and artistic identity within the closeness and tragedy of her family and a small community. The portraits of Pam’s parents Lance and Henrietta are surprisingly tender, despite the cruel, intergenerational misunderstanding.

Part Two is called “House of Stone.” It takes Pam farther afield to various lovers, unnamed islands, distant provinces, and a “house of stone” across the sea in the Old Country. In Part Three, “A Good Place,” an older Pam returns to visit her sister’s place in Alberta and is re-awakened to details from her past.

Pam considers father’s fate in a poignant poem entitled “To the green chair he sat in every night to watch Jeopardy:”

You held him steady,
even though you rocked a little
while he nodded off
as the wine kicked in.

You took his weight,
Less every year
as his appetite faded.

Only you could touch him. Sometimes
the phone rested on your arm
as he waited for me to call –
I didn’t.

Alone, you consoled him.

Some readers might have to read the poem twice in order to realize the “You” refers to an inanimate object, not a person.

The Ponoka Mental Hospital for the Insane is now the “state of the art” Centennial Centre for Mental Health and Brain Injury.

A retired librarian, bookseller and co-founder of the bookstore at Page’s Resort & Marina, Phyllis Parham Reeve lives on Gabriola Island.