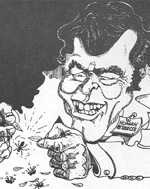 
As a Victoria Times cartoonist, Bob Bierman, born in 1921, was thrust into the national spotlight when he depicted B.C. Human Resources Minister Bill Vander Zalm gleefully picking the wings off flies. Vander Zalm sued for libel, successfully at first. Bierman appealed the decision and won. Court of Appeal judges decided his cartoon was fair comment and represented Bierman's honest opinion. The cartoon was featured on the back cover of Bierman's book entitled 1984: A Collection of Political Cartoons by Bob Bierman (New Star, 1982.)