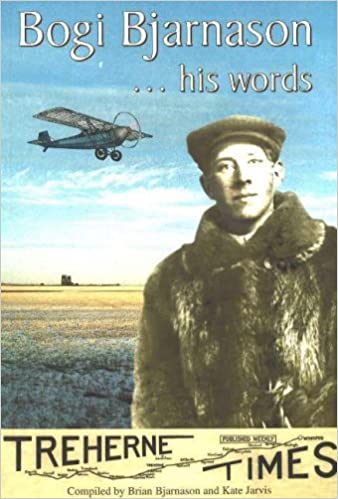 
For the title, Bogi Bjarnason: His Words (Creative Connections, 2002) Brian Bjarnason collected his father's writings; letters from the Front (WW1), editorials, poetry, short stories and correspondence. Kate Jarvis is also credited on the cover for giving the book its structure and helping with the practical side of publishing.

Bogi Bjarnason was born of Icelandic parents in North Dakota in 1888. Between 1913 and 1927 he owned three Saskatchewan newspapers. During that time he saw action in WWI with the US Army and was gassed twice. Between 1927 and 1945 he lived in Manitoba, where he published two Icelandic papers and the Treherne Times. In 1933 he bought and flew a Pietenpol aircraft. He lived and wrote in Vancouver from 1945 until his death in 1977.