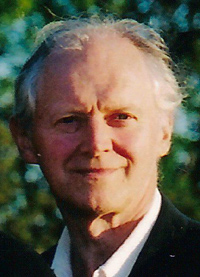 
Paul Rossetti Bjarnason took five years out from his studies to win a silver medal for Canada in weightlifting at the 1967 Pan-American Games, and to compete at the Mexico Olympics in the following year.

The Vancouver-born writer went on to complete a philosophy degree and then to teach secondary school in Vancouver for twenty years, during which time he and his wife, Valerie, began publishing educational handbooks written by BC teachers, as well as producing several works of their own. But the book that is closest to the heart of this Icelandic-Italian author concerns philosophy. His Stargazers: Stories of the first philosophers (O Books, UK $19.95) fulfils a long-standing pledge: "I started writing Stargazers when my daughter was in high school," he says. "I wanted to provide a memorable answer to her question What is philosophy? So I promised to write a book of stories depicting the first philosophers in the very act of being philosophers. My aim was to transport readers directly into the philosophers' lives, inviting them to answer the question for themselves." Although the first few chapters came quickly, other commitments intervened, including postgraduate studies in ancient philosophy, and sidetracked the project for several years. But during work on his thesis on Epicurean ethics, Bjarnason was introduced to the works of the French scholar Pierre Hadot. "When I first read Hadot's essays," he recalls, "I encountered a view that not only takes account of the existential dimension of philosophy, but actually accords it a primary status. The question How should one live? was of fundamental importance to all the ancient philosophers; it was bound up with their chosen way of living and its consequent rational discourse. For me, Hadot's representation of ancient philosophy highlighted its profound relevance to everyday life, and I was inspired to return to the task of portraying that relevance... The ancient philosophers remain supreme exemplars. They are an inexhaustible source not only of wonder and delight but also of a practical wisdom that is still capable of leading us toward flourishing lives -- to a kind of living that is consistent with our very survival as a species. What could possibly be more timely?"

After Bjarnason spent twenty-two years teaching secondary school English and mathematics (including logic), as well as an introductory philosophy course for senior high school students, he retired from teaching in order to work at publishing and writing. He and his wife Val have managed LPL Publishers since 1989, through which they have published a series of provincial examination preparatory handbooks written by BC teachers (e.g., The Math 12 Handbook, The Physics 12 Handbook, The Chemistry 12 Handbook, The English 12 Handbook, The Biology 12 Handbook, etc.). In 2001, he returned to formal studies, completing an MPhil in Ancient Cultures in 2004.

EMPLOYMENT OTHER THAN WRITING: Publishing of educational handbooks

Articles: 1 Article for this author
Weight Training for Everyone ($13.95)
Info


THE FAMILY THAT PUBLISHES TOGETHER, licks envelopes together...

Using their collective energies, the Icelandic-Canadian family of Paul, Val and Palma Bjarnason have operated LPL Lifting Press since 1985. A Vancouver high school teacher and former weight lifting champion, Paul Bjarnason initially self-produced Weight Training for Everyone ($13.95), with a foreword by Doug Hepburn. He has published four more such titles, plus an audio cassette tape on weight training. 'We learned by trial and error," Paul laughs, "many, many errors. The first book wasn't pasted up properly so the three of us collated every single book by hand!" Fourteen year old Palma, with two poetry books already in print, is currently writing a fantasy novel. Her mother, Val Bjarnason, has just produced Friendship ($7.95), a unique gift book of quotes about friendship by writers from antiquity, lovingly presented in hand calligraphy with Celtic designs. "It is a nice feeling to start from scratch and then see the finished product," adds Val, "but it's also nice to sell something people will like. "Friendship is a subject that is neglected in our society. I've been amazed to see how many people want and need to talk about it." Other LPL Lifting titles include Steam along the Sound ($6.95), a pictorial look at the Royal Hudson train route by photographer and steam rail buff Nils Huxtable; Home Chiropractic Handbook ($22.95), a 200 page guide to chiropractics, with 45 full-page photos, by fourth generation chiropractor Dr. Karl Holmquist; plus three books from the Viking Ship Museum of Denmark. Most of the company's business is by mail order via P.O. Box 48808, Dept. 444, Bentall Centre, Vancouver, B.C. V7X 1A6. Meanwhile, Emil Bjarnason (no relation) has published a collection of vignettes about the Icelandic community that existed around Wynyard, Saskatchewan. The Whole Truth: Sagas from the Quills ($10 plus $1 shipping) was published by the Icelandic Canadian Club of British Columbia c/o 3446 West 19th Ave. Vancouver, B.C. V6S 1C2.