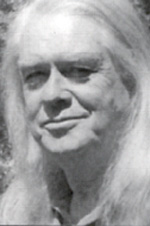 
Bjornson says he accidentally wrote Raymond's Raindance while waiting for inspiration for the 'Fairly Good Canadian Novel.' Both whimsical and sophisticated, Raymond's Raindance opens with a philosophical quote from Aeschylus about how wisdom comes to us 'by the awful grace of God.' Confined to bed with rheumatic fever, fourth-grader Matt discovers the avian world outside his North Vancouver window and befriends Raymond, a common bushtit, who proves to be anything but common in Harrill Bjornson's self-published Raymond's Raindance (Skoal House 1998 $8.95), illustrated by Roy Peterson. The little nondescript bushtit can read, dances like Gene Kelly, and ends up on David Letterman.

Having "served 36 years of a run-on sentence as a mendicant newspaperman", Bjornson now feeds the birds in his backyard 'and tries to remember the birthdays of his seven grandchildren.'