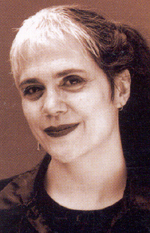 
A member of the lesbian art collective Kiss & Tell, Blackbridge is a sculptor, video maker, visual artist and performer who lives in Vancouver. Her work has been exhibited in Canada, the U.S., Europe and Hong Kong. Her first novel, Sunnybrook: A True Story with Lies (Press Gang, 1996), follows Diane, a psychiatric survivor who meets an ex-inmate at a local lesbian bar. It's a funny, illustrated story about disability issues that was shortlisted for a Lambda Literary Award. It was followed by Prozac Highway (Press Gang, 1997). Blackridge's titles with Kiss & Tell are Her Tongue on My Theory: Images, Essays and Fantasies, as well as Drawing the Line: Lesbian Sexual Politics on the Wall. She is also a co-author of Bonnie Sherr Klein's Slow Dance: A Story of Stroke, Love and Discovery (Knopf, 1997) which was accorded the VanCity Book Prize in 1998.


As a 'true story with lies', Persimmon Blackbridge's Sunnybrook (Press Gang $23.95) follows an autobiographical heroine, Diane, who fakes her way into a counselling job at the Sunnybrook Institution for the Mentally Handicapped.
"I tried to remember what Anne Bancroft did with Patty Duke in The Miracle Worker. I walked him over to a tree and put his hand on it. 'Tree,' I said. 'Tree,' he said.";
Previously diagnosed with learning disabilities, Diane knows how to conform to the psychiatric system, even though she can barely read herself. She combs Value Village looking for pantsuits that don't make her look like a kid dressing for Hallowe'en.
When her lesbianism and psychiatric past are revealed after a chance meeting at Sappho's bar downtown, Diane spends more and more time in the staff washroom with a Harlequin style romance.
"I wondered who had left Honeymoon for Nurse Holly on the back of the toilet,"; she writes. "Was it a nurse who longed for a steely embrace to distract her from the smell of piss and Lysol? None of the nurses I knew seemed like the type. They weren't that naive. If they longed for anything, it was the end of their shift.";
Aided by Blackbridge's original art and cryptic asides in the margins, Sunnybrook skewers professionalism with knowledgeable poignancy. It's rightly described as an 'hilarious and angry' memoir about a group of people whose lives are made up of small acts of resistance, stealing moments of joy whenever possible.
If the Booksellers Choice Award wasn't tied to commercial success, Blackbridge's 'visually arresting' Sunnybrook, designed by Val Spiedel, might be a leading candidate for most original production of the year.