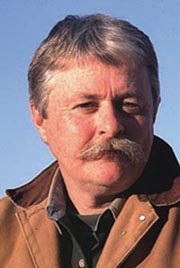 
Rick Blacklaws was born in Calgary, Alberta, and came to B.C. in 1972 to complete his graduate studies in archaeology. Since then, he has traveled B.C., photographing the province in all its regions and seasons. Trained in landscape photography, Rick creates images that document people and their relationship to the land. Ranchland [2001] is his third book; his most recent title, The Fraser River [1996] (text by Alan Haig-Brown), won the 1997 Roderick Haig-Brown Regional Book Prize. In 2020, he co-published with Carol Blacklaws, The Fraser: River of Life and Legend (Image West $34.95).

Carol Blacklaws counts herself as one of the lucky few to have traveled the entire 1,375-kilometer length of the Fraser River. With her husband, Rick Blacklaws, she has also floated down much of the waterway and witnessed “the river’s chameleon-like character as it transforms from an icy glacial stream in the Rocky Mountains to a cauldron of water sinkholes—with hydraulics that could suck a boat into its boiling whirlpools—in the narrow canyon walls of Hells Gate, and finally to drift west into the river’s estuary at the metropolitan city of Vancouver.” Both Carol and Rick Blacklaws have worked in the fields of archeology and teaching, which led them to accompany and organize many student rafting trips on the river. Now they have collaborated on a coffeetable book about their trips on B.C.’s defining river, The Fraser: River of Life and Legend (Image West $34.95). Carol wrote the text and Rick contributed the photography. Covering the wild upper reaches of the Fraser (land of the lodgepole pine), through the dry rangelands of the Cariboo and down the treacherous canyon, and finally the fertile delta of Metro Vancouver, the book provides insights into the landscapes of the river and the people who live on its banks. The Fraser has remained a big part of the Blacklaws’s life. For example, when most wives are getting jewelry and a candle-lit dinner for their tenth wedding anniversary, Carol Blacklaws was getting “silted”—i.e., drenched by river water that dries and leaves a light dusting of sediment. Rick had given her a raft trip down the Fraser. And the name of their oldest son? It’s Fraser. 9780994817518