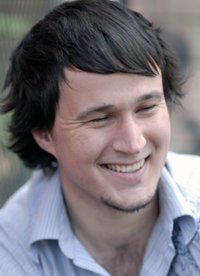 
As an arts and entertainment reporter for the Victoria News, Patrick Blennerhassett, at age 26, released Monument (Now or Never Publishing 2008), a first novel that takes the form of fictional memoir by its central character named Seth Wilhelm.

"A lot of the book is derived directly from personal experience," says Blennerhassett, "playing hockey, drinking, drugs, dealing with being young and very, very stupid in a culture of Canadian bars, clubs, hockey rinks and house parties. This book is about my friends and I, and how we all sort of get lost after, or during, high school. Especially in today's world where the cards are stacked against kids like myself who grew up lower middle class, destined for a lifetime of labour and hard-drinking. This book kind of examines how we get there, and what we also enjoy about it. Living a life of simple sensory pleasure is a great-short term goal, but I also wanted to go deeper into themes of agnosticism, nihilism and the likes without getting overtly philosophical. I'm not sure I succeeded, but I wanted to try.

"The language of the book is intentional, the last thing I wanted to do was bog down readers with endless flowery descriptions of settings and characters. I think the reader should have their own imagination, and I wanted this to be more than me trying to show everyone I can write good, er, well. I wanted this to be a good story, one of redemption, of Generation Y confusion, of feeling lost in your own skin, hopeless to get off the train wreck that is your life. But I also wanted to show how resilient we can be, the cliché of the human spirit is not overblown, and life is if anything, something we will always be in complete and utter awe of."

A self-described Thompson Rivers University English drop-out, Patrick Blennerhassett graduated in Journalism from Langara and won a Jack Webster Fellowship Award in 2007. Born in Vancouver, Blennerhassett has lived around B.C. in Little Fort, Langley to Kamloops. He also spent two separate summers working as a mechanical assistant for the Nunavut Power Corporation in Iqaluit, Nunavut, and he also worked as a landscape architect's assistant while living at a resort in Pahoa, Hawaii.

At 92, Balbir Singh Sr. of Vancouver became the subject of a wide-ranging biography by Patrick Blennerhassett, A Forgotten Legend: Balbir Singh Sr., Triple Olympic Gold & Modi's New India (Now or Never Publishing 2016), that draws attention to his status as a triple gold medalist for field hockey, part of a team that earned India its first Olympic gold medal at the 1948 Olympics in London, during which the new nation of India beat its former colonial masters in the final. Singh subsequently led India for gold medals in 1952 in Helsinki--as both team captain and India's flag bearer--and in 1956 at Melbourne--again as India's flag bearer. His five goals against the Netherlands in the 1952 final remains an Olympic record. Only racist politics prevented him from competing in a fourth Olympic Games in 1960. As a Sikh in Hindu-dominated India, he can be likened to the sprinter Jesse Owens who startled Hitler at the 1936 Olympics in Berlin. His scoring prowess finally earned him a belated Lifetime Achievement Award at the Hockey India annual festivities in 2015. Singh Sr. first visited Canada in 1972 and coached and managed India to a World Cup field hockey title in 1975.