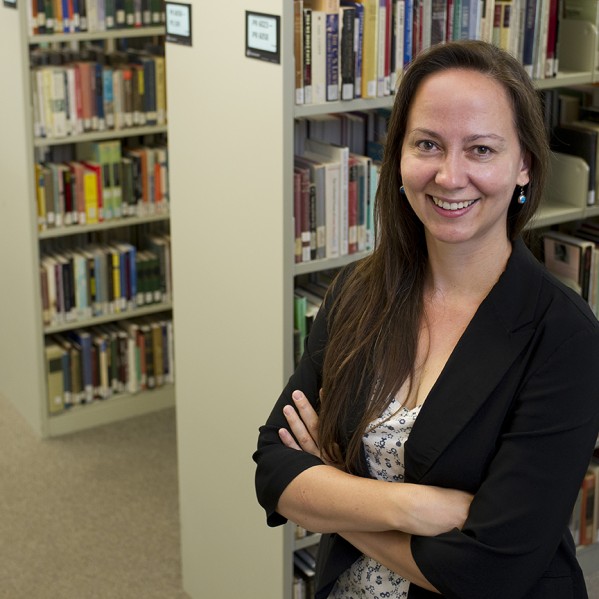 
In her study of religion and irreligion in our neck of the woods, The Secular Northwest: Religion and Irreligion in Everyday Postwar Life (UBC $95), Thompson Rivers University history prof Tina Block posits that even though our post-war populace has largely rejected organized religion, it has not necessarily turned its back on the concept of God.

Tina Block examines the nature of secularity in British Columbia and Washington State in the postwar period.

'This was not a universally secular region,' she writes, 'but residents of British Columbia and Washington State were far more likely than other Canadians and Americans to reject, dismiss, and ignore religion, particularly in its organized forms.'

For some, irreligion was a blessing in disguise. Since the 1980s, many B.C. churches have been deconsecrated, sold, and 'repurposed' as art galleries, museums, performance halls, restaurants, and even pot shops.

Reviewer Chelsea Horton finds much to mediate on in this analysis of secularism in postwar B.C. 'Ed.

Historian Tina Block's starting point in this book will ring familiar for readers of The Ormsby Review: there is a long and distinct history of secularity in the British Columbia and the American Pacific Northwest, which witnessed a clear uptick in the decades following the Second World War. As Block observes in her opening pages, the secularity of this region has elicited 'much comment, but little investigation' (p. 2).

Block's The Secular Northwest: Religion and Irreligion in Everyday Postwar Life accordingly, and fruitfully, interrogates the production of this secular culture in British Columbia and Washington State between the 1950s and 1970s. Secularism, in this case, means more than unbelief. Through a focus on the everyday, Block reveals a regional culture that eschewed organized religion and atheism alike, 'and that accepted and allowed for multiple, intermittent, and informal ways of engaging and rebuffing the sacred' (p. 4).

This culture, she further illustrates, did not emanate from any natural regional essence. Rather, secularism was one strand that contributed to the construction of a unique sense of place in British Columbia or the Pacific Northwest.

Block gets at all of this through a rich mix of primary source material. Documentary sources such as the publications of church and secularist organizations, combined with travel literature, popular histories, and newspapers, reveal cultural currents like a lingering discourse of 'the white, male wageworkers frontier' in the Northwest (p. 11).

Quantitative sources, meanwhile, illustrate that irreligion (a term Block uses interchangeably with secularity) was 'broadly based' in the region. Census and survey data, for example, reveal that women and middle-class residents, not just working-class men, were 'less religious than their counterparts in other regions' (p. 14).

Block also draws on forty interviews that she conducted in Vancouver, Nanaimo, Seattle, Olympia, and Port Angeles with individuals across, and even off, the secularism spectrum. Attentive to oral history as memory act, Block examines these interviews for insights into the construction of a regional irreligious identity. Riffing on the 'lived religion' approach of the likes of religious studies scholar Robert Orsi, Block further draws on these interviews to explore everyday experiences of 'living against' religion in the Northwest (p. 7).

This comes to life most vividly in Block's fifth chapter, which is focused on the family. Here we meet interviewees, women especially, wrestling with assumptions of female piety, family expectations, and democratic ideals as they struggled with quotidian decisions such as whether or not to send their children to Sunday school.

While interview quotes are woven throughout The Secular Northwest, I found myself wanting more of the texture featured in this chapter, more stories and feel for specific places, people, and the messiness of lives lived. I wanted to know more about Jean and the hummingbird that brought her more joy than sitting in any church pew ever did (p. 102).

Perhaps that's because I (and I suspect many readers of The Ormsby Review) am such a direct product of the history of British Columbian irreligion examined here. Indeed, I can't shake the thought that my own grandparents, who were all complex postwar suburban settler secularists on the west coast, would have made compelling interviewees for Block. (That is, had they been the type to respond to newspaper advertisements seeking academic research participants; they most decidedly were not).

In contrast to The Secular Northwest's close analysis of gender, class, and place, race receives somewhat shorter shrift in this book. Block argues that, 'Northwest secularity crossed lines of race and ethnicity, but was presumed to be made and perpetuated primarily by whites in the region. It was imagined as an element of the Northwest's frontier identity, an identity premised in part on unquestioned assumptions of whiteness' (p. 168). Given this, Block's decision to focus on white subjects makes sense. But the category of whiteness itself, along with the colonial discourse of the frontier, calls for deeper examination.

Further, how did white secularity in the Northwest intersect with ongoing church involvement in the operation of Indian Residential Schools in B.C. in this period? And, on the more 'noble' side of the savage equation, what of postwar associations of Indigenous peoples and nature in this region? And of related appropriations of Indigenous spiritual forms?

To point up such questions is not meant to pull the classic reviewer's 'this-is-not-the-book-I-would-have-written' move. Indeed, Block herself identifies several future avenues of inquiry at the end of The Secular Northwest, the experiences of 'non-European, non-Christian populations' included (p. 172).

This thoughtful and thought-provoking work will also be interesting to revisit in light of the forthcoming publication of another historian, Lynne Marks, who takes up the issues of irreligion and religion in settler British Columbia in an earlier period.

The Secular Northwest is social history, both old school and innovative. General readers may find its analytical sections somewhat slow going, but it's worth it. There is, appropriately enough, much to mediate on here.

Chelsea Horton is an historian based on Vancouver Island, where she resides in traditional Snaw-Naw-As territory. She holds a Ph.D. in Indigenous history from the University of British Columbia and is the co-editor, with Tolly Bradford, of Mixed Blessings: Indigenous Encounters with Christianity in Canada (UBC Press, 2016). Chelsea teaches in the field of Indigenous history and works as a research consultant with First Nations communities in British Columbia.

Review of the author's work by BC Studies:
The Secular Northwest: Religion and Irreligion in Everyday Postwar Life