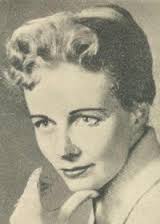 
"Where hope is stifled youth must go." -- Patricia Blondal, from her set-in-B.C. novel, From Heaven with a Shout

Patricia Blondal was a promising Manitoba-born novelist whose two novels were published posthumously, hence her work is seldom cited. Her second novel, From Heaven with a Shout (M&S 1963), is about a woman who marries into a well-to-do family involved in the logging industry of Vancouver Island.

Her first novel, A Candle to Light the Sun (M&S 1960), received critical acclaim and conerns 1930s' life on the Canadian prairies during the Depression.

In his critical essay, "Home Away: A Thematic Study of Some British Columbia Novels" that appeared in BC Studies magazine in 1984, George Bowering cites Blondal's From Heaven with a Shout as one of eleven important B.C. novels in which central characters are involved in "looking for a home" in the course of making his argument that finding or making a home has been a unifying feature or symbol of British Columbia culture.

The protagonist of Heaven with a Shout, Ardis makes a deal with wealthy widower Alex Lamond that he will see to it her son is provided for with her relatives and she will come to the West Coast. Her 'new home' puts her square into the lap of luxury and family intrigue. The Lamonds are timber barons living in a mansion in the trees. From here they venture out on shopping sprees to Victoria. Eventually Ardis comes to except her husband's home as her own. Bowering writes that Ardis's search for a home, "is related here to a theme of the hopelessness of postwar England and the necessity of remaking a life on the frontier of the Empire," and quotes Blondal: "Where hope is stifled youth must go."

In her novel A Candle to Light the Sun Blondal introduces the Prairie town of Mouse Bluffs, set in the 1930s. Against the vastness of Prairie skies, human existence seems minute and frail all the while clinging to the begrudging land. The novel's characters struggle to make a living and find small moments of hope with each other and dreams for the next generation. Blondal wrote the story as she was dying of breast cancer, knowing that she would leave behind a young son and daughter.

Born in Souris, Manitoba, in 1926 as Patricia Jenkins, she moved to Winnipeg with her family in the 1930s and attended United College from 1944 to 1947 where she was a classmate of Margaret Laurence. It is noteworthy that the somewhat glamourous Jenkins would eventually publish her first novel about smalltown Manitoba life prior to Laurence's first published foray into the same territory.

On July 4, 1946, Jenkins married Harold Blondal who worked variously as a doctor, engineer and eventually as a cancer researcher. Following the completion of her degree, Blondal worked as a broadcaster for the CBC in Winnipeg. Before settling in Montreal in the Fifties she traveled throughout Canada and England, where she lived for one year. In Montreal she resided with her husband and their two children, Stephanie and John, writing short stories, her two posthumously published novels and the manuscript for an unpublished mystery novel. While writing, she worked in public relations and as a reporter and cigar store clerk. Blondal died in November, 1959 at the age of 32.

Blondal's desire to be a writer began in her youth: "At a very early age the magic of being able to put a word on paper and convey 'cat' into another's head fascinated me.";
She began serious writing in 1955. At the same time that she began to settle down and start a family, Blondal continued to compose and send out works of fiction and drama, including a short play about Louis Riel, most of which were rejected by publishers. In the 1950s she wrote that her coat of arms was "a typewriter rampant on a field of rejection slips."

Blondal's archives are at the University of British Columbia Library Rare Books and Special Collections. The material held there reflects Blondal's personal life and work as a writer, radio broadcaster, university student and researcher. The works clearly show Blondal's interests in the areas of religion, philosophy, psychology and criminology in the 1940s and 1950s. Records are arranged into four series, spanning from about 1929 to 1963, including documents that were added by her husband following her death in 1959.