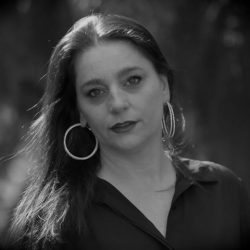 
Heige Boehm's debut novel for young adults, Secrets in the Shadows (Ronsdale 2019), concerns two boys growing up in Nazi Germany who think life is an adventure until they have to fight on the frontlines and are confronted by the reality of Hitler's propaganda and anti-Semitism.

Boehm's writing is influenced by her personal history. Although born in 1964, for the first nine years of her life Boehm sometimes imagined that World War II was still raging. Living with her family beside a major thoroughfare in Cologne, Germany she was often awakened at night by the roar of army tanks in her street; her sisters found a hiding place in their basement where they thought a Jewish family had hidden; and a nearby WW II bomb shelter held stories of a boy who died there. When her family visited relatives in the former German Democratic Republic (East Germany) she saw many bombed-out buildings and bullet holes that hadn't been repaired for decades. When Boehm and her parents immigrated to Canada, she began asking questions about Nazi Germany.

She writes: "My writing is influenced by the stories of my parents who grew up in Nazi Germany and who, at the end of the war, found themselves in East Germany. They escaped with their first two children to West Berlin in 1961, and I was born in Euskirchen West Germany on November 11, 1964. Ten years later my family and I immigrated to Vancouver, Canada, where we lived at the Sylvia Hotel for the first few months. I spent nine years researching and writing Secrets in the Shadows.? She has a creative writing certificate from The Writers' Studio of Simon Fraser University and lives on the Sunshine Coast.

Motivated by her need to understand how her ancestral home of Germany could have supported Adolf Hitler and the Nazi regime, Heige Boehm has written Secrets in the Shadows from a German boy's perspective.

Secrets in the Shadows by Heige Boehm (Ronsdale $14.95)

Born more than two decades after WW II ended and living alongside a major thoroughfare in Cologne, Heige Boem was often awakened at night by the roar of army tanks during the first nine years of her life.

When Heige's family visited relatives in the former German Democratic Republic (East Germany), she saw the ruins of many bombed-out buildings and walls with still-visible bullet holes. Her sisters found a hiding place in their basement where they thought a Jewish family had hidden.

Only when she emigrated to Canada with parents could Boehm begin to ask questions about Nazi Germany. She needed to know how 37 percent of ordinary German people chose to elect a racist dictator. And why this nation of civilized people supported a mad man's desire for world domination.

Now Heige has published a debut novel for young people, Secrets in the Shadows, motivated by the fact that her father had been a young boy when Hitler rose to power in the early 1930s. Her story follows two boys in Nazi Germany who initially believe that life can be a glorious adventure until they must fight on the frontlines and grasp the reality of Hitler's propaganda and the horrors of anti-Semitism.

In November of 1934, seven-year-old Michael Boii has a seemingly idyllic life in a small farming community in Germany. The local baker, Frau Bummel, gives him a donut on his way home from school. Blond-haired, he brags to her that doctors at his school have told him that he is a perfect Aryan.

Later, Michael witnesses one of his mother's friends, Frau Silberstein, being harassed by older Hitlerjugend kids, the violent youth wing of the Nazi Party. They yell "Jude" at her. He doesn't think much about it. Two of his older brothers are in the Hitlerjugend and his older sisters both belong to the League of German Girls (BDM).

Michael dreams about getting a letter from Adolf Hitler, "summoning me to join Deutsches Jungvolk. Papa would be proud of me then." He runs through a farmer's field yelling, "I'm special!" His father, an SS officer, is pleased by the doctors' assessment.

But in a hazelnut tree grove, where he and his best friend 'Wolfie' play with home-made bows & arrows, Herr Zimmerman, a farmer who has a wooden leg from injuries suffered in World War I, is not at all impressed with Michael's news about being pronounced special. "Complete and utter nonsense!" he says. "Special? You're more like that Schwarzkopfiges sheep over there."

Michael's oldest brother has a stutter. The school expels him to be sent to a home for lunatics where children often disappear. Michael's parents quarrel about it because his mother doesn't want her son to go away. Michael's father slaps his wife several times, which the children witness from upstairs.

Five years later, Michael now attends regular meetings of Deutsches Jungvolk. He promises his mother he will pick up his 14-year-old sister Paula from her BDM meeting after his event. Michael gets distracted by a snowball fight with his friend, Wolfie, and arrives late for his sister who is being raped by two, older Hitlerjugend teens. Michael intervenes and kills one of the rapists; the other runs off.

Bucolic village life has been a facade. But when the war is officially announced, Michael is still mesmerized by Nazi propaganda. His Aryan nation will soon take over the world and establish a world-wide German government called the "Third Reich." His father says to him, "Boy, you're lucky to be alive in such exciting times!"

Michael's father orders him to go into combat training at age 16. He and Wolfie are sent to France, marching through battle areas strewn with gory sights and carnage. "Along the roadside, dead soldiers lay with their eyes open and mouths gaping, their bodies torn open and their guns still at their sides.

"We began picking up the dead and draping their bodies over the jeeps. The wounded cried out for help, and we tended to them the best we could, although the only thing we could do for now was put them on the tanks to take them with us."

As the Germans start losing the war and have to retreat, honour is lost. Captured soldiers are shot and not taken prisoner. Michael throws up at the sight of an American tank being blown up. "The blast tore through the Sherman like a warm knife through butter, and the men running behind the tank scattered, looking for cover. The Sherman's turret popped open, one crewman spilled out, another followed, his clothes on fire and his right leg smouldering where it had been blown off just above the knee."

By December, 1944, Michael is officially "strategically retreating." Making their way back to their home village is vicious and grueling but Michael and Wolfie get back alive. Two brothers and one sister dead are dead; their heroic father is on the run to Argentina. "We came home, Mama," are his last words in the book.

Heige Boehm holds a writing certificate from Simon Fraser University and is working on a follow-up novel.