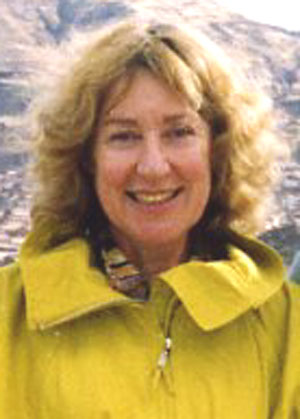 
Based on her first-hand experiences in the Andes, as an anthropology professor at Malaspina University College, Inge Bolin published, Rituals of Respect: The Secrets of Survival in the High Peruvian Andes (University of Texas Press, 1998)

Born in Germany, Bolin has studied and worked in Germany, Scotland, Switzerland, France, Spain, Belize, Guatemala, Singapore, Indonesia, Peru, and the US. As an airline hostess with Lufthansa she also experienced many other parts of the world. She has made her home in Canada since 1969 and in BC since 1989 when she came to Nanaimo to teach Anthropology at Malaspina College, now Vancouver Island University. She holds certificates and degrees through to the PHD and speaks German, English, Spanish, French, some Mandarin Chinese and some Quechua and writes in the first four languages.

For more than 30 years, Bolin has done ethnographic research and volunteer work in villages in Indonesia, Central America, then in the jungles of the Amazon and in highland Peru where in 1992 she founded a Peruvian NGO "Yachaq Runa" that deals with Andean Medicine, Nutrition and Ecology. This organization consists of volunteers ranging from native healers to physicians, dentists and scientists. They carry out health campaigns in villages within the highest regions of the Peruvian Andes. They also cooperate with the indigenous population in the establishment of schools, health stations, solar lighting, solar hot water, greenhouses, drinking water, irrigation and reforestation projects, etc.

In addition to her academic awards, Bolin was honoured with the Circle of Courage Award from Reclaiming Youth International in 2009. In 1999 she was given the Medalla de la Ciudad de Urubamba and was declared Huesped Ilustre de Urubamba, Peru. In 1988 she received an award for her cooperation on life-sustaining projects in the community of Yanahuara, Peru. She has received funding over the years for her projects in Peru from the German Red Cross and the Landkreis BÃ¶blingen in Germany.

Her first novel, When Condors Call (Inge Bolin, 2010) follows a young physician from the Peruvian Andes in search of a cure for leishmaniasis, a disfiguring disease.

Bolin returned to some of the highest inhabitable regions of the Andes to do research for a forthcoming new book to be called Thirst in the Andes - Climate Change and Solutions for Survival. Her 2016 stay in Peru enabled her to discover that, due to climate change, the disfiguring and deadly disease Leishmaniasis, which is at the center of her novel, is on the increase and has reached epidemic proportions in some regions. While calling attention to the Zika virus, Doctors without Borders also cited Leishmaniasis as one of the most dangerous and neglected tropical diseases.

When Condors Call - A Novel of Peru (Nanaimo: Chaska Publications, 2010)

Growing Up in a Culture of Respect - Child Rearing in Highland Peru (University of Texas Press, 2006)

Rituals of Respect -The Secret of Survival in the High Peruvian Andes (University of Texas Press, 1998)

Rituals of Respect: "Bolin makes this story accessible to a more general reader, with an almost novelistic eye for detail and without sacrificing scholarly depth. Both experts and lay readers can be pleased with the result." (Johnny Payne of Northwestern University. Founder and Director, Summer Intensive Program in Andean Studies in Cusco.

Growing up in a Culture of Respect: "This is a wonderful book, a brilliant book, one that explains Andean culture in a totally unique and fascinating way. (Thomas M. Davies, Jr., Professor Emeritus of Latin American History and Director Emeritus, Center for Latin American Studies, San Diego State University).

"Societal changes have consequences, and how a people choose to raise their children reveals much about their values and spirit of place. Andean children are fully entwined in a network of reciprocal obligations, thereby discovering the meaning of being human. It is this culture of respect that Inge Bolin reveals in this splendid and original book." (Wade Davis, author and Explorer-in-Residence, National Geographic Society).


YACHAQ RUNA (meaning the wise people in the Quechua language) is an NGO of Peruvian volunteers I founded in Cuzco in 1992 and which deals with Andean Medicine, Nutrition, and Ecology

During my field research I realized that in remote regions of the jungles and highlands of Peru there are few, if any, medical facilities, physicians, or modern medicines to treat severe diseases. .

Even in cities where such facilities exist, the poor can seldom afford to be treated. Fortunately people in rural areas continue with traditional healing methods using locally available herbs and remedies. In many cases these are as effective as modern medicine, but with fewer side effects. But the geography of Peru - a dry coastal desert, high mountain ranges and extensive jungle regions - constitute barriers to communication and the dissemination of knowledge. In fact, even between neighbouring villages, people do not communicate readily about their ancient medical practices given centuries of persecution and ridicule by the conquerors and their descendents. Thus herbs and medical traditions of one particular region or micro-environment are often unknown to people living in another zone.

Given these circumstances, it became clear to me that in order to achieve a wide knowledge base about traditional health, healing, and the preservation of the environment, people of different backgrounds and from different ecological zones needed to come together periodically to exchange their knowledge.

Thus in September of 1992 I brought the group Yachaq Runa to life by asking knowledgeable people I have known for years to come to Cuzco for an inaugural meeting. Healers from the frigid heights of Chillihuani met with agriculturists from temperate and subtropical regions and with nurses, teachers, doctors, dentists, university professors and ecologists. Although such a mixed group is not the rule in Peru or elsewhere, it soon became evident that its members appreciated the inter-disciplinary and interethnic dialogue on a topic of concern to all. It was quite interesting to see Dr. Cáceres, one of Cuzco's most prominent physicians and one of the most esteemed surgeons of Peru, engage in vivid conversations with Modesto, a llama and alpaca herder who lives close to 5000 meters a.s.l. It is also interesting to note that during the first meetings of "Yachaq Runa"; the pastoralists from the high mountains whispered as they explained the medical properties of their plants. As time went by, they became more outspoken and took increasing pride in their knowledge.

Apart from exchanging knowledge, the Yachaq members provide regular workshops on diverse health-related issues throughout large parts of the highlands. They also teach how to establish herb gardens, dry and preserve herbal plants, process them into teas, lotions and creams, and exchange them between major biotic zones. In many villages throughout the provinces of Urubamba and Quispicanchis people now have inexpensive or free medicine available throughout the year.

As more funding became available through the German Red Cross and the town of Böblingen, from friends and family, and from "Change for Children"; in Edmonton in the initial years, the group began to do monthly health campaigns in the highest habitable regions of the Andes. Hundreds of villagers assemble in every community, happy to receive free treatment, the services of medical specialists and dentists.

Bread with hot chocolate makes waiting in cold windy regions more attractive Antibiotics are provided when they are needed and available. Patients with severe illnesses are taken to a hospital in Cuzco. Food campaigns (subject to funding by friends and family) take place when crops have been destroyed and animals have died during extreme weather conditions. Seed potatoes for whole villages had been provided several times by the Anthropology students I taught at Vancouver Island University (formerly Malaspina University) in Nanaimo.

Over 70 projects, (not counting the frequent health and food campaigns) among them a mini-hospital, have thus far been implemented by the Yachaq Runa group in cooperation with the indigenous population.

A few years ago, the previous president of the German Red Cross of Stuttgart, Ludwig Prince of Baden (the first cousin of England's Prince Charles) ventured with his wife, Princess Marianne, to Peru to visit the projects. They expressed their appreciation for "Yachaq Runa"; as being one of the best and the most interesting groups they have ever funded in the world. The princely couple left their castle in Germany to climb with no roads to 4,500 meters a.s.l. and slept in the llama herders' tiny adobe huts with no electricity or running water, calling this experience the highlight of their trip. The present president, Dr. Lorenz Menz, is equally thrilled with the love and sense of responsibility by which this exceptional group works. Hopefully this pattern will continue into the future. But the rapidly melting glaciers, the increasingly extreme weather conditions at high altitude and the increasing scarcity of water makes survival more difficult each year. Along with my work with Yachaq Runa and the indigenous population of the high Andes, I am presently writing another book; this one dealing with the catastrophic impact of climate change in the high Andes. It's sad that people who live a most simple way of life and don't pollute at all, are the first ones to suffer the horrendous effects of climate change in their remote and forgotten villages in the high Andes.