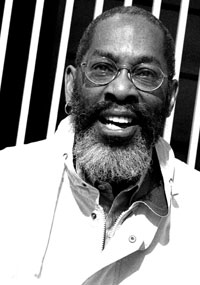 
As the first collection of stories from folk/blues artist Fred Booker of Burnaby, Adventures in Debt Collection (Commodore $16) offers recollections of growing up black in Canada and reflects Booker's "day-job"; adventures as a repo man, confronting debtors and repossessing vehicles with tow-truck hook-ups. His collection agency is fictional; but the altercations and mishaps are close to the truth.

Booker published short fiction in Event, Whetstone and The Windsor Review and published poetry in Prism International and the anthology Bluesprint: Black British Columbian Literature and Orature, edited by Wayde Compton, one of the founders of Commodore Books. Commodore Books derives its name from the paddle steamer which transported thirty-five black migrants from San Francisco to Victoria 147 years ago, at the behest of half-black Governor James Douglas, to offset the incursion of white American migrants during the Gold Rush. Affiliated with the West Coast Review Publishing Society, Commodore Books is touted as the first and only black literary press in Western Canada.


It is with great sadness that we at Commodore Books mourn the loss of Fred Booker, who died at Burnaby General Hospital of pneumonia after a long battle with cancer on June 4, 2008. Booker was our first author, and we are proud to have begun our publishing mission with his Adventures in Debt Collection. Booker's fiction has been reviewed in multiple periodicals, including The Vancouver Sun and The Georgia Straight; his work has and will continue to be taught in colleges and universities; and Booker was writing new material right up to the very end. He was a versatile artist who published poems in a variety of literary journals across Canada in the 1970s, as well as releasing a series of folk-blues albums as a singer-writer into the 1980s. Later, he turned to short fiction, publishing stories in literary journals throughout the 1990s, eventually coming to our attention through Wayde Compton's research for the anthology Bluesprint: Black British Columbian Literature and Orature. A highlight of Booker's career was hearing two of his stories dramatized on the CBC Radio One show Between the Covers in 2007, and knowing that his words were being heard across the nation. Booker is survived by his life partner, Monique, and all of us, his readers and friends.