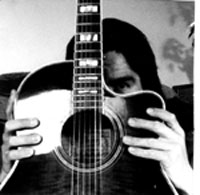 
On a press release to promote his co-produced theatrical experiment in 2014, Walking Projects: Vancouver, Crawling, Weeping, Betting, Chris Bose was self-described as "a writer, artist, musician, filmmaker and a Scoundrel."

Officially a member of the N'laka'pamux/Secwepemc Nations, formerly known as the Thompson people of the Spuzzum area ("They hooked-up at St. George's residential school in Lytton"), Chris Bose was born in Merritt, B.C. in 1970.

Chris Bose is also a founding member of the Arbour Collective, an Aboriginal arts collective based in Kamloops, with a national membership.

Bose is a writer, multi-disciplinary artist, musician and filmmaker who has read and performed at universities, theatres and coffeehouses from Victoria to Montreal, as well as at the BC Festival of the Arts as a literary delegate to the Talking Stick Aboriginal Arts Festival in Vancouver and Toronto's Word on the Street Festival. Bose is also a workshop facilitator of community arts events, digital storytelling, art workshops with people of all ages and backgrounds, curatorial work for First Nations art shows and projects, research and writing for periodicals across Canada, project management and coordination, mixed-media productions, film, audio and video recording and editing, and more.

Earlier, Bose was once self-described as "a very tattooed ex-vegetarian who doesn't drink alcohol, smoke, do drugs, and for awhile quit drinking coffee when a friend told him that Aboriginal people around the world are being displaced from their lands by coffee growers." Along the way Bose has been the father of two children, a cobbler, a radio DJ, a bookstore clerk, president of the student body at the local University College, a farm labourer and homeless. He has lived in Stockholm, Sweden and Austin, Texas.

His creative non-fiction narrative, also described as a novel, Somewhere in this Inferno (Theytus, 2004), reflects the struggles a young man who is troubled by existential questions and cultural adaptation.

His second book, A Moon Made of Copper (Kegedonce 2014), consists of non-fiction poems written while touring across Canada. They capture Bose's experiences "getting into adventures and misadventures."

Bose's writing has also appeared in numerous anthologies and he has released several CDs of his music.

At the outset of 2014, Bose co-created and co-presented the aforementioned Walking Projects. According to his co-creator David McIntosh: "It starts as a book of 12 stories. Six are written by Chris Bose (native guy), six are written by me (white guy). The stories are about various encounters we've had with or within the City of Vancouver. Chris creates 12 'maps.' One for each story. The maps go in the book and on the gallery walls (the book is there, too) of the Unit Pitt for a seven-week run open to the public during regular gallery hours. Free. Each Thursday night a guest artist will interact and respond to what's in the gallery as a 'Witching hour performance.' Whatever they leave behind will be allowed to accumulate in the gallery space. You can watch it from the street. Free.

"Each Friday night, the Unit Pitt Project gallery in Vancouver's Downtown Eastside will host Bob's Salon, free to the public. A guest story teller will tell a story about a journey, sex, death, siblings, animals... plus Vancouver. Musicians and dancers are tasked with immediately improvising those themes (maybe there's time for another drink first).... So the whole thing is a way of layering and hopefully deepening the idea of a city being a place of human encounters... with structures, histories, and each other. Instead of one Civic Narrative there are many possible encounters, with lives, the past, ghosts, the present, each other, etc...."

In 2019, Bose published N'shaytkin (battery opera books, unpriced). N'shaytkin means, "a relation that has passed on, or those that came before us" in the language of the Nlaka'pamux First Nations. Bose uses faux-memoir, film-script and storyboards as well as maps, pictograms, and drawings that Bose created with his daughter Jayda, to explore the failure of a mine tailings dam in the B.C. interior from five perspectives. Set in and around a remote reserve of Kkemci'n outside Spences Bridge, the narrative underscores issues such as the impact of colonialism, environmental disaster, and indigenous mythology. Bose's subtle humour and introspection animate the stories in this novella.

As of 2019, Bose works as a councillor for at risk youth in Kamloops.

Somewhere in this Inferno: A Narrative (Theytus Books, 2004)

Film:
- "Adventures in Wonderland" a short documentary about contemporary Aboriginal Canada.
- "The Art of Self-Destruction" & "At the Heart of it All" have screened in four countries and more than a dozen film festivals and conferences this year (2008). His work can be ordered through: www.vtape.org
- "Taagi Trio Project" 3 short films to the music of Dawn Avery and words of Janet Rogers,
Smithsonian, National Museum of the American Indian, Washington, DC, Nov 10-14 . 2008
- 2 music videos (2009):1 Janet Rogers, "What did you do boy?" screened extensively across North America, nominated for various awards.
- "Dreaming My Land": (2010) Creative Editor for short, experimental film by Tracey Bonneau, Ullus Collective, REACT 2010 project.
- "Jesus Coyote TeeVee" (2011) An experimental film about see the world through Jesus Coyote's eyes, a mythical being created inhabiting both the First Nations and non-native spiritual values. A new take on the trickster.

Live Literary Events:
Active touring author, Chris has read at Universities, theatres and coffeehouses at all points from Victoria to Montreal, as well as at the BC Festival of the Arts as a literary delegate to the Talking Stick Aboriginal Arts Festival in Vancouver and the Word on the Street Festival in Toronto.

THURSDAYS: 11:30PM - 12:30 AM WITCHING HOUR SOLOS (viewable from the
street through live projections on windows)

SATURDAYS: 12 - 5 PM GUIDED IMPROVISED TOURS OF THE CITY BY SIX
PERFORMERS, BASED ON BOSE AND MCINTOSH'S STORIES AND MAPS. (first
come, first tour).

Chris Bose and David McIntosh, retrace their separate trajectories
through the streets of the city. Their memories, reanimated wraiths and
the spirits imbibed are recorded in a series of twelve stories and
accompanying maps. Installed in the gallery, these reports and
boundaries document their embodied experiences of Vancouver. Afternoon
guided city tours, late night improvised art salons and witching hour
solos, will enable guest artists, citizens and visitors to respond,
react or ignore the reflected world of Bose and McIntosh. Bring your
ghosts, bring your body, have a drink and take your chances. Join the
conversation about this city, your place, our past and its spirits -
both the ones that stubbornly linger, and the ones that enable
forgetting.

ABOUT THE CREATIVE TEAM AND GALLERY

CHRIS BOSE is a war party baby of the N'Laka'Pamux and the Secwepmec
Nations (they hooked-up at St. George's residential school in Lytton).
He is a writer, artist, musician, filmmaker and a Scoundrel.

DAVID MCINTOSH is a settler party baby of a White-Man and a White-Lady
(they hooked-up at the Waldorf bar in Vancouver). He is a writer,
singer, state-funded-artist, and a Sommelier.

BATTERY OPERA PERFORMANCE is a performing arts company based in
Vancouver. The work of battery opera interrogates the contemporary body
as a site of intersecting and displaced cultures, histories and habits.
battery opera performance investigates this body, this place, within a
contemporary-colonial matrix, cognizant of the interplay between art,
power, politics and history.