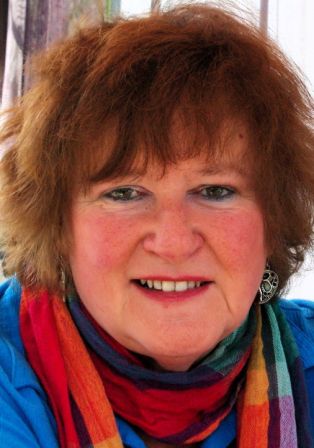 
Born in Montreal, Quebec, on July 22, 1948, June V. Bourgo is a self-described fulltime novelist after years of working in marketing/sales for a telecommunications firm, managing a physiotherapy clinic, living on a houseboat in Victoria harbour and working at a gold mine on a remote mountain in the Yukon.

She chose to turn her experiences-good and bad-into life-changing lessons. She reports her debut novel, Winter's Captive (Toronto: Asteroid Publishing Inc, 2011), was picked up in March of 2014 by Fountain Blue Publishing, based in Los Angeles. It was revised and released in October, 2014. The novel shares lessons she learned through the fictitious story of one woman's struggle to enlightenment and empowerment.

Bourgo's publishing credits include feature articles for a single-parenting magazine. She also writes historical copy for a painter of historical British Columbia paintings. Educated in Montreal, Quebec, she now lives in the British Columbia interior surrounded by ranch lands, with her husband and two head of cat; Marbles, a calico diva and Picasso, a subservient tabby. She previously worked part-time as an Administrative Assistant for the Village of Clinton, with a population of approximately seven hundred people.