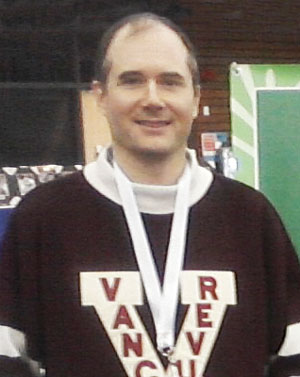 
Born on February 16, 1957 in Vancouver, the remarkably diligent hockey historian Craig H. Bowlsby earned his BFA degree from University of British Columbia and became a member of the Canadian national fencing team. His love for the sport led him to self-publish a novel about fencing, Taking the Blade (Vancouver: College Printers, 1984). 0-9691705-0-5.

Bowlsy has also self-published five stories and the text of his play, The Hound of London (Vancouver: Intrepid Productions), a Sherlock Holmes mystery first staged at Burnaby's James Cowan Theatre in 1987. These were followed by 50 copies of Ice Age Memories, A Bibliography and Compendium of Early Hockey Publications (1996).

Bowlsby's major publications are histories of hockey in Western Canada. His self-published, illustrated, 381-page reference work on ice hockey in British Columbia, from 1895 to 1911, The Knights of Winter (unpriced, 2006), unearths lists of all players, all teams, records of games, etc., that are about as beguiling as Egyptian hieroglyphics. What does it all add up to? No matter. He got the excavation job done for others. It's a monumental work. Bowlsby cites the diary of Reverend John Sheepshanks in January of 1862 as the first recorded reference to hockey being played in British Columbia, at New Westminster following a freeze-up of the Fraser River.

Bowlsby has followed The Knights of Winter (2006) with an equally admirable, 388-page volume, Empire of Ice: The Rise and Fall of the Pacific Coast Hockey Association, 1911-1926 (Knights of Winter 2012 $25). It features Cyclone Taylor, Frank and Lester Patrick, Nels Stewart and others. The PCHA created the first American teams to compete for the Stanley Cup. 978-0-9691705-6-3

Bowlsby has also published fiction, including a novella entitled Horth in Killing Reach, (part of the continuing sci-fi series of Okal Rel novels by Lynda Williams, published by Edge science fiction in Calgary) with another novella in the series about to be released, entitled Horth at Moon Shadow.

Once upon a time, hockey was akin to rugby in that the puck, like the ball in rugby, could not be passed forward. In 1913: The Year They Invented The Future Of Hockey, hockey historian Craig Bowlsby gives a detailed look at the introduction of the forward pass into the game. He writes: "Before 1913, the game of hockey had to be played backwards. The Patrick brothers of the PCHA [Pacific Coast Hockey Association] shattered this hallowed tradition, and played the game forwards. The new rule they invented-the forward pass-was denounced as a farce, and its implementation thought to be impossible. There was only one way to prove they were right-to win the Stanley Cup against the NHA using their despised and reviled new rule. A hundred years ago the Patricks took that challenge."

Review of the author's work by BC Studies:
Empire of Ice: The Rise and Fall of the Pacific Coast Hockey Association, 1911-1926
The Knights of Winter: The History of British Columbia Hockey from 1895 to 1911

Articles: 1 Article for this author
Empire of Ice
Publisher's Promo (2012)


Back of book info on Empire of Ice:

Vancouver did win the Stanley Cup.

And so did Seattle and Victoria-in a league created a century ago.

The PCHA rose and fell like the Roman Empire, but left its own mark on history. Now fans can re-live how the Patrick Brothers invented modern hockey, and brought the highest level of the game to the Pacific Coast, and to the world.

This legendary league has never, until now, been comprehensively recorded. Craig H. Bowlsby has unearthed much new information. He has debunked common misconceptions, and even solved many mysteries. Empire of Ice chronicles the rise of the PCHA to the pinnacle of its success, and then to its final, bizarre plummet. All the league's exciting Stanley Cup struggles are described in detail, as well as the trials, experiments and scandals of the regular seasons. This brings to new light the techniques and exploits of the great hockey stars of both West and East.

The PCHA also created the first American teams to fight for the Stanley Cup, and the stories of Seattle, Portland and Spokane are fascinating ones. As well, fans can read how the teams of both the NHL and the Prairies clashed with the Pacific Coast in search of the Stanley Cup. There is much new information about Montreal, Ottawa, Toronto, Quebec, Saskatoon, Regina, Calgary, and Edmonton.

A cornucopia of statistics is provided for those who relish in-depth comparisons.

For all the drama, and for one of the freshest views of hockey history ever published-read on!