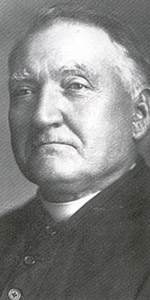 
"The Father was an average man working against super-human odds." -- Charles Lillard

Also known as Auguste and Augustus, Augustin Joseph Brabant was a Belgian missionary, born on October 23, 1845 in Rolleghem and ordained in 1868. He was the first priest to permanently reside on the western coast of Vancouver Island and he established the first European religious mission on the West Coast of Vancouver Island since the departure of the Spanish in the late 1700s. Having first visited the West Coast of Vancouver Island with Right Reverend Charles Seghers in 1874 and having just returned from Sitka, Alaska, Brabant arrived at Clayoquot Sound on Vancouver Island as a 29-year-old Catholic priest, aboard the twenty-eight-ton schooner Surprise, and he proceeded to stubbornly operate "the poorest church in Christendom" at Hesquiat, at the north end of Clayoquot Sound, about a four-hour boat trip from Tofino, from 1875 to 1908.

Not long after his arrival in 1875, Brabant's fingers in his right hand were deformed after he was attacked by Hesquiat Chief Matlahaw who, fearful he had contracted smallpox from Brabant, shot Brabant twice using Brabant's own gun. First Matlahaw shot Brabant in the right hand. While the priest was cleaning his injured hand in a creek, Matlahaw sprayed the Brabant with buckshot in his back and shoulder. He was rescued by a British man-of-war, H.M.S. Rocket, and recovered in Victoria. Brabant's return to Hequiat greatly enhanced his reputation as a formidable force. Learning the local language, he held Mass and taught the Lord's Prayer, stubbornly opposing Nuu-chah-nulth shamans. "They blame me for the absence of food. They laugh at the doctrine which I teach. I can nothing by making the sign of the Cross. I am neither a white man nor an Indian," he wrote. "I am the Chigha, the devil."

Gradually Brabant prevailed. Brabant's memoir of his missionary work first appeared in serialized form in The Messenger of the Sacret Heart. His serialized reports were republished collectively as Vancouver Islands and its Missions, 1874-1900 (New York: Messenger of the Sacred Heart Press, 1900). This summary was used by Reverend Van Der Heyden for a 1920 biography. Condescending and distrustful, Brabant saw himself making a great sacrifice to serve God first, and his Aboriginal flock second. He wrote, "The Indians seem not to notice the general depression of the seasons. For one born and raised elsewhere, accustomed to the society of is fellow white men, there are no words to convey how monotonous it is, and how lonesome one would feel were it not for the thought of the sacredness of the object for which he is here. Nothing in the world could tempt me to come and spend my life here were it not that the inhabitants of these inhospitable shores have a claim on the charity and zeal of a Catholic priest." Brabant became the administrator of the Diocese of Victoria in 1908. He died in Victoria in 1912. Mission to Nootka, 1874-1900: The Diary of Father Augustin Brabant (Sidney: Gray's Publishing, 1977) is an annotated version of his memoirs, edited by Charles Lillard.

Wary of intrusions by non-Catholic missionaries, Brabant was a key participant in the founding of the Christie Residential School at Kakawis ("place of berries") on the western shore of Meares Island in 1900, a school Brabant had named for Alexander Christie, bishop of Vancouver Island. The Oblates of Mary Immaculate took charge of the immense school in 1938 from the Benedictine Order. A B.C. Supreme Court judge once called the Indian residential school system "nothing more than institutional pedophilia." The Christie School finally burned to the ground in 1983.