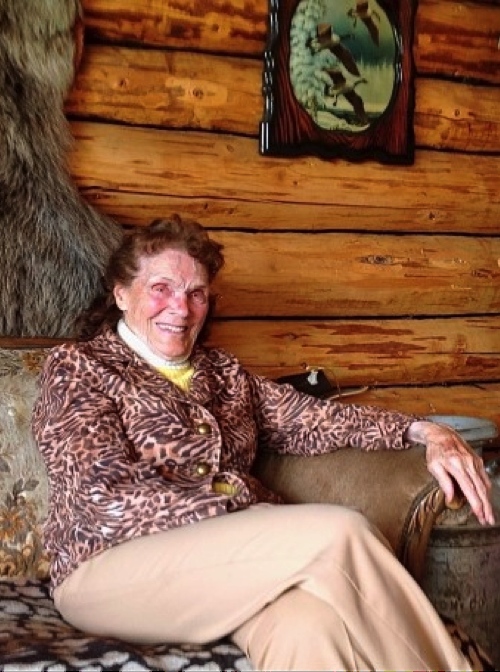 The Bracewell family obtained the lease for building their family-run Alpine Wilderness Lodge on a 360-acre property in 1976, the year they sold their Circle X Ranch. The following spring, in 1977, they started developing the property. It wasn't until the winter of 1982-83 that the plans for the main lodge were drawn up by Kevan Bracewell. Work began the following spring, once the frost came out of the ground after breakup. It took three years to finish the lodge, carved out of the wilderness by hand. Logs and timbers milled on site by Alf Bracewell's sawmill. The lodge became home to pioneer cowgirl Gerry Bracewell who has been described as the "Annie Oakley of the Chilcotin."; Her memoir Gerry Get Your Gun (Caitlin, 2015) is a powerful tale of one of the toughest, gender-busting pioneers in B.C.'s backcountry.

In addition to being a ranch hand and spending 50 years guiding visitors through the wilderness, Gerry Bracewell helped create the area's early school system, she wrote articles for the Williams Lake Tribune, she ran her own ranch and she raised four children. In 2004, she was inducted into the BC Cowboy Hall of Fame as a Pioneer Rancher. The claim has been made that Gerry Bracewell was the first accredited female hunting guide in B.C.

Gerry Bracewell was born Ethel Lovell in the northern Alberta farm country where she was raised. She came to Vancouver as a 16-year-old in 1938, getting a job as a nanny and housekeeper. One day she and another nanny her age decided to attend a dance in Vancouver's Moose Hall. While riding in the streetcar, they hatched out a scheme not to give out their real names at the dance. Ethel said she would be Gerry, and Elsa decided on the name Jacquie. The names stuck.

Gerry spent the following summer working on a ranch at Big Creek (where she took a "selfie"; of herself at time). She told Jacquie about all the fun she had in ranching country. When Gerry returned to the Chilcotin to work for KB Moore in Tatlayoko, Jacquie followed her lead and checked out Big Creek for herself. Gerry married KB Moore's son, Bev, and Jacquie married local cowboy and rancher, Duane Witte.

Her mentor, KB Moore, trained her to become the first female hunting guide in the province. Since then she has had more than her share of hard core adventures-such as encounters with grizzly bears in the high alpine while leading a half-broke packhorse on a rugged trail.

When she was pregnant with her first childe, she had to make a January sleigh ride through a foot-and-a-half of snow, from Tatlayoko Valley to Tatla Lake, to meet the doctor who had driven 225 kilometres west from Williams Lake to deliver her breech-birth first child.

Her community occupied a broad footprint from Tatla Lake to West Branch, Kleena Kleene, Tatlayoko Valley, Eagle Lake and the Upper Chilko River-landscape so foreign to most British Columbians that it might as well have been the moon. Everyone helped one another, including elders, bachelors, families with newborns, families with teens, wealthy ranchers, dirt-poor bush hippies, First Nations, loggers, trappers, stump farmers, lodge owners, professionals of all stripes and retirees. Age was no barrier, race was not an issue, social status was insignificant.

Everyone mixed. So Bracewell later become friends with her fellow Williams Lake Tribune contributor, Sage Birchwater, even though they couldn't have been further apart politically. "She was right wing conservative,"; he says, "and I was a bleeding heart lefty. She was building a great lodge, and I was raising goats on my trapline and having babies born at home. But these differences were minor. We had bigger things in common. Our abiding love for the Chilcotin was perhaps our biggest bond.";

Sage Birchwater has commented on Bracewell's memoir, Gerry Get Your Gun, released by Bracewell at age 92, having lived in the Chilcotin Valley for over 75 years:

"Gerry Bracewell has always courted a strong sense of destiny. When she was a 31-year-old single mom, she felt compelled to drive her pickup truck to the end of the dirt road at Anahim Lake and rent two horses to take her and her two young sons to the construction site on the Bella Coola Hill.

"It was September, 1953, and two bulldozers were coming from opposite directions pushing a road through the Coast Mountains. They were on the verge of meeting, and Gerry wanted to be there to record this historic moment for all posterity with her fixed-lens windup 8 mm movie camera.

"When she got there with her two sons, Marty and Barry, the fateful meeting of the Cats was still two weeks away, but Gerry was undaunted. She took some spectacular footage of the construction activity in the mountain landscape and left her camera with one of the Cat drivers, Alf Bracewell, to capture the moment when it occurred.

"Gerry and Alf barely knew each other at the time, but four months later they were man and wife."

Two husbands, four children, nine grandchildren, and two great grandchildren later, Gerry made her mark with her memoirs.
Upon publication, she was amused by the notion that who live the longest have the final say in defining history. For instance there are a couple of mountains Gerry Bracewell has named in her home country of Tatlayoko Valley. Marmot Mountain stands by itself, prominently occupying the lowlands between Cheshi Pass and Stikelan Valley. It lies between the Potato Mountain Range and the snow-capped Coast Mountain Ranges further south. The rancher who named this peak, Huckleberry Mountain, is long gone, so Bracewell put her own brand on the marmot-inhabited hill that she built a trail to. She may have trouble convincing mapmakers to change its name, but the appellation of the other mountain she named after her late husband, Alf Bracewell, will have more permanence. Gerry registered the Alf Bracewell Range after Alf's death in recognition of his achievements pioneering the Bella Coola Road through the Coast Mountains.

Gerry Get Your Gun depicts Bracewell's adventures as she perseveres and pioneers through the harsh life of ranching. Snippets of her book were being written when she had the time.

"I'm overwhelmed that the book is finally out,"; she confessed, in 2015. "That's the best word I can think of at the moment. I didn't think it would happen because I was always such a busy person. I'd do it piecemeal. I'd write what I could then I'd have to go out and milk the cow or feed the chickens, then I'd come back and write a bit more."

Gerry Bracewell can still be found at her Alpine Wilderness Lodge in Tatlayoko Valley, her resort and guiding outfit that can be viewed www.bracewell.com