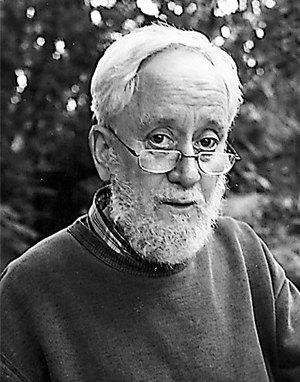 
Fred Braches served as the editor of BC Historical News from Spring 1999 to Summer 2003.

Precious little spadework on B.C. literary history has been undertaken by B.C.'s universities. That leaves the door wide open for dedicated sleuths such Fred Braches of Whonnock who has written and published an important study of little-known Fraser Valley novelist George Godwin.

Nearly all B.C. English professors continue to specialize in non-B.C. writers-leaving the grunt work to non-academics such as Dutch-born Fred Braches (b. 1930).

Braches and his wife Helmi immigrated to Vancouver in 1974 and have lived for decades on acreage in the community of Whonnock, in Maple Ridge, B.C.

After he retired from a career in ocean transportation, Braches became increasingly interested in the obscure early history of the eastern part of Maple Ridge. He has been steadily amassing materials about the life and times of the Fraser Valley pioneer George Godwin (1889-1974) who wrote two novels connected to Whonnock, The Eternal Forest (1929) and Why Stay We Here? (1930).

Not a mere amateur enthusiast, Braches was editor and prime producer of BC Historical News before the B.C. Historical Federation changed the magazine's name to British Columbia History. Later he won their Best Article Award for 2009 and their Website Award in 2008 for his Slumach website.

Braches has since remained active by writing, editing and producing a series on the history of Whonnock and Ruskin (Maple Ridge) called Whonnock Notes, freely available on the internet but also produced in a magazine format for $5 plus $5 for shipping and handling. Now he has gathered his George Godwin research into a single Spring issue entirely devoted to Godwin.

After a foreword by Godwin's granddaughter, Lucy Godwin, Fred Braches clearly states in his preface that his extensively illustrated booklet "does not pretend to be a biography of George Godwin.";

He is also careful to credit the essential spadework of Godwin's great-nephew Robert S. Thomson who has edited and reissued both of Godwin's B.C.-related novels.

"Since Dr. Thomson's biographical work was mainly done in the 1990s, updates and revisions are necessary to correct erroneous views that have no basis in fact.";

In his new publication Braches has added significant new knowledge to the biography of of Godwin. He has also collected new photos and is quoting from the following sources:

(2) Letters to J. S. (Ted) Roberts (May 1964 and April 1965) -- This correspondence between Roberts and Godwin started with their shared interested in the life and work of Captain George Vancouver. The original letters are now the property of Lucy Godwin who gave permission to publish part of their content in Whonnock Notes.

(3) Godwin's "Private Journal. Quotations were transcribed from a photocopy of the original manuscript with the consent of Lucy Godwin.

In 1995, Fred Braches retired from a career in ocean transportation that started in Amsterdam in 1953. He was stationed for many years in South America and Hong Kong and, after settling in Canada, in Mexico City. Throughout his career he made frequent business trips all over the Americas and the Far East.

In 2017, Fred Braches released Fact and Fiction; Slumach and the Lost Creek Mine to share his ongoing research on one of B.C. most legendary stories--about a rumoured gold mine in the Fraser Valley. "With this book," he says, "I try to debunk the myth that old man Slumach - people don't realize that he was over 70 when he was hanged - had nothing to do with the legendary gold."

The co-author of a well-known book on the same subject, Rick Antonson, has responded, "As spring approaches and more people consider hikes north of Pitt Meadows and Maple Ridge in hopes of stumbling upon a cache of gold nuggets, your book about Slumach (nicely dedicated "To the memory of Slum.ook") is well-timed.

"You graciously separate facts (of which there are many) from fiction (of which there is much) regarding a hundred years of embellishments. Indeed, anyone reading our Slumach's Gold, In Search of a Legend would be well advised to also pick up your book. Congratulations on your dogged determination to remind us all that there is lots to learn and ponder about British Columbia's history without the need for distortion of truths.

"Your role in the TV series, Search for the Frozen Gold, had you perfectly cast as the wise doubter, the resolute pursuer of veracity over folklore on all-things Slumach. Now, as an author, you have furthered that reputation for objectivity. Congratulations my friend."

Through the Eyes of Brian and other Friends. (1998)

The Family of Catherine and Edward Julius Muench. (2002)

The Case of Private Cromarty: A Soldier from Whonnock. (2005).

The Trondheim Congregation: The Norwegian Minutes Books of the Lutherans in Whonnock (1997).

[There is also some information about Norwegians in British Columbia in Gulgrand Loken's study entitled From Fjord to Frontier: A History of the Norweigians in Canada (McClelland & Stewart, 1980)]


One of the most enduring tales of murder and gold in B.C. was the basis for In Search of a Legend: The Search for the Slumach-Lost Creek Gold Mine (Nunaga, 1972) by Antonson, Mary Trainer and his brother, Brian Antonson, a threesome who started their own publishing company to release the book. The original title reputedly sold more than 10,000 copies in various editions, making it a B.C. classic. In 2007, they repackaged the story in a significantly expanded edition as Slumach's Gold: In Search of a Legend (Heritage House $14.95). It's a compilation of both fact and local hearsay about an elderly Indian named Slumach and the legend of his lost gold mine in the Fraser Valley, near Pitt Lake, about 35 miles from Vancouver. Often said in legend to have been seen in New Westminster with huge gold nuggets, over the decades Slumach gained a reputation as an evil and violent womanizer. In actual fact, Slumach shot and killed a Métis man, Louis Boulier, also known as Louis Bee, at Lillooet Slough near the Pitt River, in 1890, and disappeared into the bush before being captured. He was eventually convicted for murder in 1891. Newspapers brazenly described Slumach as a murderer long before he was caught and brought to trial. If the First Nation suspect (probably Salish) had a lawyer, a plea of self-defence might have been sufficient to save his life.

In the early 1900s an American miner named Jackson reportedly found Slumach's Mine, but he died soon afterwards, leaving behind an intriguing letter that provided hints as to the site of the mine in a remote part of what is now Garibaldi Provincial Park-and becoming the first victim of the mine's curse. Many others ventured into the difficult and dangerous terrain to seek the mine over the years also met with misfortune. The Vancouver Province once estimated the number of deaths to be around 30 people. Rick Antonson was later contacted by a former newspaper publisher who confided that gold seekers had found what he believed to be the legendary mine. That helped spark a 35th anniversary edition--triple the size of the original version--which introduces new material (three television documentaries have been made) as well as expanded research and more photos.

There are more than 2,000 references for Slumach on the internet. Fred Braches of Whonnock maintains an excellent reference site for skeptics at www.slumach.ca with encouragement from Rick and Brian Antonson, Mike Collier, Ann Lunghamer, Rob Nicholson, David Mattison, Joanne Peterson, Don Waite and the staff of the New Westminster Public Library, Vancouver Public Library, and BC Archives. There are only imaginary images of Slumach and verification that he ever had access to gold nuggets from a hidden mine does not exist, but Slumach's reputation is nonetheless global.