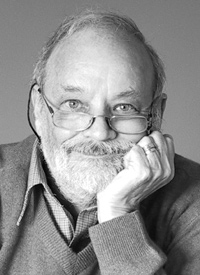 
Having written a memoir of his mother called The Shoebox Bible (M&S 2006) and won a children's literature award in Saskatchewan for Meet Miss Mullen, Alan Bradley of Kelowna, at 70, published the first novel in his projected six-volume, adult mystery series featuring an eleven-year-old detective named Flavia de Luce.

The Sweetness at the Bottom of the Pie (Doubleday 2009) focuses on the sleuthing of the enthusiastic and precocious Flavia, a chemistry buff, who lives in an ancient family house somewhere in England in the 1950s with a stamp-collecting father and two very nasty older sisters. The manuscript received the Debut Dagger Award of the British Crimewriter's Association in July of 2007, leading to its publication in a dozen countries, including Canada. Bradley's series has since been sold in more than thirty territories around the world.

In Bradley's follow-up in the series, The Weed That Strings the Hangman's Bag, Flavia investigates the sudden death -- mid-performance -- of a master puppeteer named Rupert Porson who arrives in the hamlet of Bishop's Lacey in a broken-down van.

In the third installment, A Red Herring Without Mustard, Flavia de Luce must clear a woman's name to prevent a grave injustice, while herself trying to avoid an early grave. She comes to the rescue when a gypsy is charged with the abduction of a local child. Flavia must draw upon her encyclopedic knowledge of poisons--and gypsy lore--to prevent a grave miscarriage of justice, and to solve a greater mystery:
What really happened to her long-vanished mother?

Bradley was born in Toronto in 1938 and grew up in Cobourg, Ontario. In 1969 he became Director of Television Engineering at a new media centre at the University of Saskatchewan, where he remained until taking early retirement in 1994. He was a founding member of the Saskatchewan Writers Guild and a founding member of The Casebook of Saskatoon, a society for the appreciation of Sherlock Holmes. With Dr. Willliam A.S. Sargeant, he co-authored Ms Holmes of Baker Street (Gasogene Press, 1989; University of Alberta Press, 2004).

Having started publishing his series while living in Kelowna, by 2010 Alan Bradley had moved to Malta.