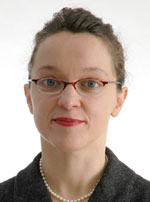 
It was Dorothy Parker who heard a telephone ring and announced, "What fresh hell is this?" In her fifty-two meditations on mothering, Fresh Hell (Demeter $14.95), Freudian scholar, Wreck Beach historian and Vancouver Public Library trustee Carellin Brooks has provided entertaining bleats and provocative analysis about the under-recognized roller-coaster ride of maternal child-rearing in the 21st century. Dorothy would approve. [SEE BELOW].

Born in Vancouver in 1970, Carellin Brooks grew up in Salt Lake City, Utah and Ottawa. A Rhodes Scholar with a doctorate in English literature from Oxford University, she enjoys biking, springboard diving and travelling.

As a self-described agnostic nudist, she had provided the best book about the nudist beach near UBC, Wreck Beach (New Star 2007). [See review below].

From Sigmund Freud's theories on penis envy to the desires of "testosterone-taking third-sexers," Carellin Brooks has also examined the proliferation of "phallic feminine figures" in North American and European writing since the end of the 19th century in Every Inch a Woman: Phallic Possession, Femininity, and the Text (UBC Press, 2005).

Brooks has worked as a Managing Editor for New Star Books and served as Vice-Chair of the Vancouver Library Board. She is an online instructor in Women's Studies at the University of British Columbia and has written freelance pieces for numerous magazines, newspapers,and more recently websites. She is keenly interested in issues facing writers including the age-old problem of making a living given new digital realities of ebooks, especially such aspects as royalties, publishing consortia and library borrowing models.

With an uncapitalized title, one hundred days of rain (Bookthug $20) won the 2016 Relit Award for best novel. It is a journal-style compendium of 99 days in the life of a woman who struggles to raise her child while coping with a disastrous break-up with her female ex-partner and the estranged father. Promotional materials draw a comparison to Elizabeth Smart's By Grand Central Station I Sat Down and Wept but repetitive descriptions of rain in the Lower Mainland, giving rise to the title, are less memorable than Smart's classic tale of a woman being stranded in Pender Harbour, having a child out of wedlock and doomed to loving an egocentric, married man, in a more conservative time. The narrator's harried urban life is also less dire than being marooned in a tiny, coastal hamlet. Lots of white space and fractured narrative don't give rise to a memorable tale, but there's an underlying intelligence that serves as an original force. 978-177-166-090-7


"Bad jobs are an insult to anybody who can think, because, as we all know, the majority of work situations view tendencies towards intelligence as a positive threat,"; says Xtra West contributing editor and Oxford grad Carellin Brooks. She has worked on an all-lesbian construction crew in San Diego and she's been a Chat Line operator-and those were the good jobs.
In Bad Jobs, (Arsenal Pulp $16.95), Brooks presents the memoirs of disgruntled workers such as Sandra Stevens, a one-time-only stripper; author Grant Buday who delivered flyers; and Hal Niedzviecki, an usher. Niedzviecki must pacify a well-dressed, drunken woman making far too much noise during a Bruce Springsteen ballad. "The reality for the under-employed, over-educated young people of North America is that the stupid job is their future,"; he says.
Larry, a graveyard shift attendant at OK Parking, was once held at knife point. He now surveys the world from the safety of his bullet-proof booth. "Anna Karenina took me a week, as did Dante's Inferno,"; he says. "Ape & Essence and Farewell to Arms took me a night. I am expanding myself in a diminutive job. Not everyone can say that."; 1-55152-055-9


long Wreck Beach and on Vancouver sidewalks, I've been selling copies of Carellin Brooks' new social chronicle Wreck Beach (New Star $19) because it helps people be proud of their Wreck Beach nudist community and its accomplishments.

The reaction has been mixed. Some rednecks, even on Commercial Drive, have shouted obscenities, complaining that I'm naked, despite my sky-blue skimpy swimsuit! On Davie Street others have angrily called me gay.

Many more passers-by have congratulated me, in part because Wreck Beach has done much to help free attitudes about nudity for 37 years. Wreck Beach-the book-is also filling a gap. Full of wit and integrity, it's a vital historical summary that supports the preservation of this freedom destination.

Although Carellin Brooks is herself a young Vancouver "agnostic nudist"; (or naturist), she is mostly objective telling the ups and downs of the beach community. She matter-of-factly relates how the beach was named, why it's nude, the legality, and the politics, including the beach being a largely self-policing enclave.

Some people mentioned in the book might be a little embarrassed (including me), but their treatment is pretty fair. She goes into drugs (legal and illegal), the blonde beach vendor Watermelon's naked busts (her pot arrest), gay sex, gambling, strolling food vendors, relations with the RCMP (mostly harmonious), outhouses, gawkers, textiles (genital-hiders), nude enforcers, flower boxes, Bare Buns Fun Runs, Kokoro Dance performances, and much more.

Brooks' fair-minded approach might help save this near-wilderness from development. And it might even help save University of British Columbia buildings from sliding down the cliff onto Wreck Beach.

My own activism for the beach, and for nudism, goes back to when I organised the first two (and only) demos to defend nudity at Wreck Beach. Nobody has been charged with nudity (a federal crime) at Wreck Beach since our "Nude-In"; on August 23, 1970. We protesters numbered 3,000 (not 2,000, as the book says). At the time I was a young U.S. war resister. Not quite as slack as Brooks writes, but it reads funny, anyway. Then in 1978 we welcomed the Rev. Bernice Gerard, city councillor, as she tried to exorcise the nudity out of us.

Do I claim to have "started"; nudism at Wreck Beach? No. As the book explains, nudity with the First Nations is not a crime or a fetish, as it is for the invaders. They swam but had no swimsuits. Among the many revealing interviews, Brooks talks with Musqueam elder Larry Grant. We're reminded that all of greater Vancouver is part of Coast Salish territory (First Nations).

The indigenes' attitudes, private nudist clubs, and the Doukhobors' nude protests in BC in the 1960s helped set the stage for popularising Wreck Beach nudism in the 1970s.

You might say that the generational attitude shifts about nudity reflect a trend throughout our culture toward tolerance. That trend is prompted in large part by nude beaches, especially Canada's most famous beach of any kind, Wreck Beach.

Vancouver being home to Wreck Beach has played no small part in nudity spreading to the stage (such as at the Fringe Festival), to the World Naked Bike Ride (which began in Vancouver), and the budding topfree movement (females legally doffing their shirts wherever males can).

As an example of Vancouver attitudes slowly regressing to indigenous-like views, the October front cover of Vancouver's Shared Vision magazine had a huge tasteful nude colour cover photo of Stephanie MacDonald, the author of their lead story on breast thermography to detect cancer.

I would have liked a similar photo of Brooks in her book, but she and her publisher have opted for posing her like a bespectacled 1940s "girl reporter,"; although they will provide a nude publicity shot, as seen in Xtra West.

Carellin Brooks has managed to cover with sensitivity even the material which is disturbing, such as the rare unnatural death.

She discusses the nudist movement and philosophy and their relation to this beach. Whereas some nudists deny any sexual motive for their nudity, Brooks doesn't buy that argument completely. She nonetheless makes it clear that social nudity is not the Hugh Hefner poolside fantasy that many imagine.

Brooks celebrates the triumph of people to keep a piece of the earth a near wilderness, and to create there an enduring human community of liberation and love.

Brooks explains the mounting danger of further building and paving at UBC. With such development, the university risks its people, its art and artifacts at the Museum of Anthropology, its other buildings, and its (our) investment. Even in our lifetimes, more sand slides onto the beach could bring some
edifices down.

The whole peninsula on which UBC sits is mostly sand. The university planners don't always consult their own experts on that, but Brooks does. UBC sometimes consults with us, the public-largely because Judy Williams, the Mother of Wreck Beach, insists it does. Luckily, chunks of the cliff usually don't collapse on clear, calm days when the most people are there. However, watch out for earthquakes.

Brooks challenges the powers that be to justify the risk of continued development of UBC-classrooms, apartments, and a big, new shopping mall. The powerful will try to ignore this book, not wanting to bring attention to their weak arguments.

Right now UBC students have set up a People's Park (illegal occupation) to protest the coming commercial mall smack in the middle of campus, at the old bus loop. Visit it on your way to the beach. Maybe this generation won't be lost do-nothings after all!

Why do half a million people from around the world annually head to this beach that is just west of-and outside of-Vancouver city limits? Because it's one thing to be influenced by the media, by school, by church; it's quite another to go to Wreck Beach and be thoroughly re-educated, mentally and emotionally, through all five of your senses.

Although Brooks refused my fact-checking, she gets nothing major wrong. My detailed suggestions: www.korky.ca/nude-peace.html.

Wreck Beach is for now the only book on the store shelf focusing on our spectacular beach in the rain forest. It's a 96-page soft cover with 27 black-and-white photos and one map. The next two books I hope will be published are a big colour photo book and a book by or about Judy E. Williams, whom you get to know in Brooks' book.

--review by Korky Day, one of the early young upstarts in the collective that owned and produced the Georgia Straight newspaper, has long been an activist for nudism.


Fresh Hell isn't about perfect new moments with your infant. It doesn't dispense sensible advice or prescribe schedules to manage the lawless days and nights of early maternity. Instead, this literary think piece, which has been described as "Eat, Pray, Love for the smarter mommy crowd,"; seesaws between disaster and delight, horror and grim resignation, much like early motherhood itself. An antigen to the anodyne, mother-knows-least tone of such cordially hated tomes as What to Expect in the First Year, Fresh Hell answers Dorothy Parker's question - "What fresh hell is this?"; - in exhaustive detail.

In fifty-two spare meditations, one for each week of baby's first year, Brooks sleeplessly covers the new mother's least favourite subjects: baby poop, more baby poop, breastfeeding and its relation to same, the pointless fights with a lover that are the inevitable result of broken nights and endless days, trying and failing to get basic work done, and all the other low points of having a baby. The book reminds frantic and time-strapped new moms that their brains are only temporarily on vacation, while its poetry will convince them that the madness they experience is intermittently divine.