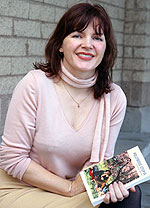 
Partially raised on a commune, former punk rocker Justine Brown earned a Masters degree and later examined idealistic social experiments in B.C. in All Possible Worlds: Utopian Experiments in British Columbia (New Star, 1995). In a similar vein, Brown has revisited Tinseltown's idealistic beginnings in Hollywood Utopia (New Star $21) to reveal how its naÃ¯ve foundations led to a tyranny of pleasure. Her novel Spin the Bottle (2007) is set in the fictional community of Gray Star, an amalgam of Sechelt and Roberts Creek, on the Sunshine Coast.

Brown links the dreamed-of realms of Wonderland, Never-Neverland, Narnia, Middle Earth and the Emerald City of The Wonderful Wizard of Oz creator Frank L. Baum--who settled in Hollywood in 1909--with the fantastical deviations of some pioneer filmmakers. "In the midst of World War I,"; she writes, "artists like D.W. Griffith and Lillian Gish hoped that by transcending geographical and linguistic barriers the screen pantomime of cinema might unite mankind.";
Inspired by Griffith's four-hour-long Intolerance (1916), a movie that cost more to make than Birth of a Nation, the brilliant young Russian director Sergei Eisenstein "was eager to justify Lenin's claim that 'for us, the most important of all the arts is cinema.'";

Eisenstein made his Battleship Potemkin (1925) and gravitated to Hollywood to pursue the nascent belief that motion pictures represented a new universal language. Lillian Gish, Charlie Chaplin and the former gigolo Rudolph Valentino were self-conscious conjurers, manipulators and cynics. Brown is more fascinated by the lesser-known Alla Nazimova, at the centre of bohemian life in Hollywood as the star of Aphrodite, and the gifted ascetic Upton Sinclair who lent his writing talents to an End Poverty in California campaign and unsuccessfully ran for governor as a leftist.

In keeping with her first book, All Possible Worlds, Brown suggests the west coast, divorced from old world thinking, is naturally a haven for experimentalism and fantasy, whether you live in Hollywood South or Hollywood North. However Vancouver and 'new age' thinking are never overt, comparative factors in this study.
Just as Tom Cruise and John Travolta are converts to Scientology, many stars of yesteryear sought divinity by embracing the elitist claptrap of Theosophy that made Jiddu Krishnamurti into a 'child star' of religion until he renounced the movement in 1929. All is vanity. "Theosophy,"; writes Brown, "in particular complemented the nascent Hollywood star system."; Brown recalls how America's Sweetheart Mary Pickford, ever virginal on screen, and the dashing Douglas Fairbanks were marketed as the Peter Pan and Wendy of California from their Pickfair mansion. Pickford's devoted fans never knew her Little Mary's tresses were long ringlets purchased from Big Suzy's French Whorehouse.
The culmination of Hollywood excess and fantasy was the San Simeon mansion built by newspaper mogul William Randolph Hearst for his ex-chorus girl mistress Marion Davies. With the unmitigated, giddy zeal of Michael Jackson in a shopping mall, Hearst collected treasures from around the globe to stuff inside his pre-Hefner emporium.

In her culminating chapter, Brown provides an astute study of how Aldous Huxley's best work correlates with what he glimpsed and disdained in Hollywood in 1925, when he saw where the 'feelies' were made in much the same way that Dorothy discovered the real identity of the Wizard of Oz when Toto pulled back the curtain.

"Brave New World reads at one level as a broad indictment of the new Californian civilization,"; says Brown. "...Pleasure is the glue that holds the society together. Huxley foresaw that a tyranny of pleasure would be far more durable than a tyranny of fear; it was a point that he argued with his friend George Orwell concerning Nineteen Eighty-Four. In a tyranny of pleasure - of carrots, not sticks - the slaves have solid reasons to remain slaves.";
In her pro-Huxley chapter called 'Shipwrecked on Prospero's Isle,' Brown recounts how and why Huxley returned to Hollywood in 1937 as an MGM screenwriter. He remained there for 26 depressing but creative years, socializing with the likes of fellow Ã©migrÃ©s Bertolt Brecht and Thomas Mann. Clearly he loathed the place. "And so perhaps,"; according to Brown, "it was in part a psychological need to distinguish himself from his new surroundings that made him select Hollywood gargantuan W.R. Hearst as the personification of the things he hated in California.";

Nathanael West's The Day of the Locust (1939) is probably the most famous anti-Hollywood novel, but Aldous Huxley's little-known After Many A Summer Dies the Swan has been no less influential. In it Huxley transparently caricatured the folly of Hearst as a compulsive collector of artifacts named Jo Stoyte, who lives in an opulent castle. "The denial of aging and death is Stoyte's major activity,"; says Brown. "...Rather like the sexed-up old men of Brave New World, Stoyte keeps himself busy with chicks, youth serums and acquisitions. Like Hearst, a well-known necrophobe, Stoyte dislikes keeping company with other aging people.";

It's a little-known fact that wunderkind Orson Welles derived his impetus to make Citizen Kane, often cited as the best movie ever made, from Huxley's portrait of Hearst in his novel After Many a Summer Dies the Swan. It's commonly agreed nowadays that movie moguls and the 'studio system' have stifled artistic idealism, but Huxley and Welles combined to make shocking news when Citizen Kane was made, complete with innovative editing techniques.
Hollywood's loss of innocence ('Rosebud') and the triumph of greed doesn't prevent Justine Brown from admiring idealistic origins. You can take the girl out of the commune, but you can never take the commune out of the girl. 0-921586-90-6

Review of the author's work by BC Studies:
All Possible Worlds: Utopian Experiments in British Columbia


NEW NOVEL TEASES OUT B.C.'S MAGIC REALITY
On September 13th the artist-run Tin Press will launch Justine Brown's playful, unsettling novel Spin the Bottle, beautifully illustrated by Fantagraphics comics legend Dame Darcy. Brown, author of non-fiction books All Possible Worlds (1995) and Hollywood Utopia (2002), has long been fascinated by utopianism. "My parents were hippies,"; she says. "I have first hand experience of commune life."; She considers herself part of a "post-utopian"; generation.

With Spin the Bottle, Brown turns her attention to the Back-to-the-Land movement which flourished in the 1970s British Columbia, and another part of countercultural life she knows well from personal experience. "The novel shows a lot of it from a child's perspective-the whole dream of living like pioneers in a hand-built cabin in the forest, without electricity, running water, or any other modern convenience. "It's kind of a dark comedy,"; she remarks, "but there's a lot of affection there too.";

The novel has historical and supernatural sides as well, dimensions that come out strongly in the gothic ink illustrations contributed by the inimitable California-based Dame Darcy.

Mermaids, fairies and phantoms abound, and a whole sub-plot involves the theory that the explorer/ pirate Sir Francis Drake came as far as the unmapped British Columbia coast in the sixteenth century, searching for the fabled Northwest Passage which would take him and his crew back to England.

"Dame Darcy's enchanted artwork emphasizes my sense of B.C. as a magical geography,"; says Brown, "a place where anything is possible.";
Publishers Press Release