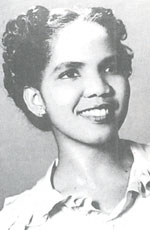 
Rosemary Brown was the first black woman to hold elected office in any Canadian parliament.

Born in Jamaica in 1930, Rosemary Brown came to Canada in 1951 to attend McGill University. There she met her African American husband, Bill Brown, who became a psychiatrist. The couple raised two sons and a daughter. Also educated in Halifax and Vancouver, she was first elected to the provincial legislature of B.C. as an NDP candidate in 1972, and was re-elected three times. "She represented the coming of multiculturalism in Canada,"; Stan Persky once told Vancouver Sun reporter Doug Ward. "Her election was seen as a concrete example that we were living in a changing world and that it might get better."; In 1975, International Women's Year, she upset the mostly male establishment of the New Democratic Party when she ran for the federal leadership with the slogan, 'Brown is Beautiful'. She was defeated by the winner Ed Broadbent, on the fourth ballot, 948-658.

Having worked as a social worker, she co-founded a crisis prevention centre, served as the Ombudswoman for the B.C. Status of Women, was one of the first advocates of affirmative action for women and was head of SFU's women's studies department. "I am, after all, a Third World woman,"; she said in 1990. She was hired as the chief commissioner of the Ontario Human Rights Commission in 1993. When asked if she thought she was hired on the basis of her race and sex, she reportedly said she hoped that was the case. She received numerous human rights awards. NDP Premier Dave Barrett was among the many men who felt threatened by her feminism, keeping her out of his cabinet; her political foes dubbed her a Cadillac socialist both during and after her 14 years as an MLA. In 1989, she published Being Brown: A Very Public Life, an autobiography that echoed her aristocratic upbringing, her battles against racism, and her often doctrinaire principles. It was dismissed by some critics as egotistical.

Rosemary Brown died of a heart attack in Vancouver in late April, 2003 at age 72. Many well-wishers attended a commemorative service at St. Andrew's Wesley United Church on May 5, 2003.