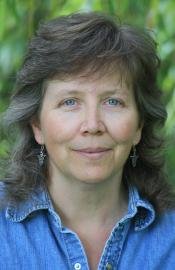 Maureen Brownlee grew up in the farming community of Dunster in the Robson Valley and went to school in nearby McBride. She lived in Arrow Lakes and Prince George before moving to Valemount, also in the Robson Valley, where she founded and operated The Valley Sentinel from 1985 to 1994. Her little-known but excellent first novel, Loggers' Daughters, was featured on the cover of B.C. BookWorld in 2014. For those old enough to remember a Canadian writer named Margaret Laurence, it can be likened to an old fashioned Margaret Laurence novel.

Brownlee's second novel, Cambium Blue (Harbour $22.95) is set in another small B.C. logging town, this time in 1995 just as the mountain pine beetle begins decimating North American forests. Major characters include a young single mother, a widowed newspaper publisher and an old junk collecter who also happened to fight in the Spanish Civil War. All are dealing with their own private crises. The novel "vibrates with violence and sings with beauty" says fellow novelist, Angie Abdou.

Imagine being born somewhere north of Quesnel, deep in the inland rainforest of the Rocky Mountain trench, back in the early '40s, back when BC Rail was still called the PGE and everyone called it Please Go Easy.

Everything you know about your parents comes from snippets of conversation you weren't meant to hear. Your grandparents died in a collision with a train, and your mother inherited the farm that is your childhood home; your father was specifically excluded, a continuous source of acrimony between your parents.

Then your father, injured in a bush accident, loses his source of income (and pride) and becomes a very heavy drinker. You'll never know for certain, but maybe it is the bar bills at the local hotel that one day persuade your parents to give you up to the local hotel owners, a German couple, or maybe they are Austrian, and so you never get past the tenth grade.

Essentially you are traded, like chattel, forced to work as a permanent, live-in employee, working in the kitchen and cleaning the hotel rooms. You don't get paid. You wonder why your protective older brother Garth doesn't come to your rescue but, of course, by this time he has finished his grade twelve and is off working in the bush. You hate it. You run away twice.

The only thing unusual about you is your name, Adare.

"She wanted to go to the city," writes Maureen Brownlee, in her first novel, Loggers' Daughters. "Get a job in a bank. Or an office. Type. Smoke cigarettes in an ebony holder. Cigarettes lit by a gentleman in a black fedora."

Years go by. You marry a young construction worker, a decent guy who has been to university, who works in the lumber industry and you have two kids. You get to do all the traditional maternal stuff that goes along with being a mill wife in a mill town in the early '50s in one of those now abandoned logging towns out along CNR's east line. You are deeply enmeshed in a life of shared labour, brawls, dances that go on all night and then everyone decides to whip up pancakes. Nobody has much but there is enough to go around.

This all comes to a grinding halt when the mill that everyone relies on burns down one frosty night. Your country loving husband decides to gamble on an offer to take over your mother's farm, long neglected and falling to ruin. Over your objections you move, you, your kids, your mill house rolled on logs onto a lumber truck. Into a life of unremitting labour: cattle, haying, kids, and a nasty, bitter mother living just across the gully.

But you thrive here, save the family farm, improve it. You can remember when you got indoor plumbing. While your husband, Dave, was off taking seasonal work for much of the year, you eke out a living on 160 acres of rock and pine and a triangle of sweet loam that touches upon the Fraser.

Then your mean-spirited mother goes squirrelly with dementia, and you get stuck with that too. Your brother Garth is a busy logging contractor, living well beyond his means. Your sister Nancy, who married early, and often, now lives safely distant in Kamloops.

When your cancer-ridden mother dies in 1983 - after three months in hospital - during which you take the brunt of enduring the dreary, pain-ridden, guilt-ridden vigil typical for so many families, nobody deeply acknowledges your sacrifice because, after all, by now, it is expected of you.

Then the worst thing happens. Even your wise and usually considerate brother Garth thinks the family farm should be sold four ways. There is no will. Your siblings need and want a share. Everyone has delayed talking about this while your mother was alive.

Then the best thing happens. Your smarty-pants daughter, Brianne, who left town when she graduated from high school in 1972, is held overnight in jail in Vancouver for participating in some demonstration against American missiles. So you visit her for a few days. You accompany her to an eye-opening conference at UBC called Women and Words, June 30 - July 3.

At this monumental gathering of a thousand women, you learn about the fire-bombings of pornographic video stories by a secret group called the Wimmins' Brigade. You also visit a women's shelter where Brianne volunteers, a refuge for countless women who invariably go back to violent and abusive households for the sake of their children.

More importantly, you learn about a Supreme Court decision made against a Canadian farm-wife named Irene Murdoch in 1973 who tried to legally claim her fair share of the family ranch following a divorce. Listening to passionate women debating the inequity of the Murdoch case, decrying the court's paternalist legal decision as "bourgeois bullshit," it strengthens your resolve to stand up for what is owed to you.

That's just a glimmering of the deep dignity of perseverance that permeates the text of Loggers' Daughters. Anyone who sticks with the narration that bounces back and forth between past and present will probably agree Maureen Brownlee's long-in-gestation, fully-fledged first novel deserves to be heralded as a triumph.

Quite likely this manuscript has endured previous incarnations. No matter. It is now a mature work. If you are not thirsty for mere cleverness, if you can appreciate instead how each anecdote has been forged from experience, you will never forget the protagonist, Adare Wilkins, in much the same way you will always recall the likes of Hagar Shipley in The Stone Angel or Rachel Cameron in A Jest of God.

The title Logger's Daughters and a cover image of a choker cable around a tree are far from beguiling, and likely few readers beyond rural B.C. are going to be comfortable with a novel that doesn't explain what a skidder is, but Brownlee has wrangled and honed a family saga until it has finally emerged as a sublime testament to the strength of the women who maintain families within the timber, ranch and construction industries of the province.

Brian Fawcett, who left his hometown of Prince George at age twenty-two, has recently written his own novel about central B.C. with a similarly prosaic title, The Last of the Lumbermen (Cormorant), examining much of the same territory from a male perspective. Peter Trower's trilogy of logging novels has also been largely overlooked.