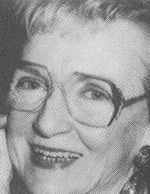 
One of the bestsellers in the Lower Mainland for Christmas in 2003 was the old-stylish Cooking with Mona (Whitecap), a decidedly nostalgic re-issue of the Original Woodwards Cookbook recipes from North Vancouver's Mona Brun. A food consultant for Woodward's Food Floors for 28 years, Brun promoted B.C. food products and hosted cooking shows, from the PNE and the Abbotsford's Agrifair, and also on TV (Culinary Capers, Creative Cooking). Mona Brun grew up in North Vancouver in the 1930s. She married in 1945, raised four children, and returned to working outside the home at age 40 when she began doing food demonstrations for Dairyland. This led to appearances on CBC Radio's Food Facts in 1960, then live television cooking demonstrations on CBC's Cuisine 30 Show. Woodward's stores asked her to audition for its Culinary Capers TV show in 1963. The original Cooking with Mona cookbook appeared in 1977.

Articles: 2 Articles for this author
Cooking with Mona (Whitecap $24.95)
Info


Meanwhile one of the big hits for seasonal sales was the decidedly retro Cooking with Mona (Whitecap $24.95), a nostalgic re-issue of the original Woodward's cookbook recipes from Mona Brun. A food consultant for Woodward's Food Floors for 28 years, Brun promoted B.C. food products and hosted cooking shows, from the PNE and the Abbotsford's Agrifair, and also on TV (Culinary Capers, Creative Cooking). The original Cooking with Mona cookbook appeared in 1977. Mona rocks. 1-55285-449-3


At Woodward's, on television, at the PNE, and at cooking demonstrations throughout B.C. and Alberta, Mona Brun has been an ambassador for good food for almost 50 years. During her 28 years as the Woodward's Food Floors food consultant, she developed recipes, organized in-store promotions and demonstrations, and appeared on the Woodward's cooking shows broadcast on CTV, such as the Jean Cannem Show. Cooking with Mona first appeared in 1977. It featured Mona's most requested recipes as well as her down-to-earth advice on cooking and entertaining with style. "In the olden days, recipes were handed down from generation to generation, but today we do need cookbooks and cooking shows,"; Mona says. "I was giving a demonstration for Scotch Eggs, which called for the eggs to be hardcooked and wrapped in a sausage meat mixture and breadcrumbs before being cooked. A lady in the audience asked why the eggs needed to be hardcooked, if they were going to be cooked again? Can you imagine trying to wrap meat around a raw egg?"; A tireless promoter of British Columbia food products, Mona has served as the vice-chair of the BC Marketing Board and a consumer representative for the BC Liquor Distribution Branch and the BC Egg Producers Committee. Throughout the 1970s and 1990s, she hosted a diverse program of cooking shows at the PNE and Abbotsford's Agrifair. Mona has been active in bringing the best in international cuisine to Canada. She assisted James Beard for two years when he taped his cooking show in Vancouver, and Muriel Downes, co-director of the Cordon Bleu, when she gave demonstrations at the Oakridge Auditorium. She was president of Ventura Imports for 15 years, a wine importer, and a representative for New Zealand Lamb in Western Canada. -- 2003