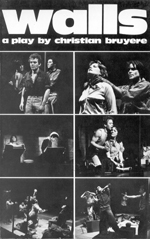 
Born in Paris in 1944, Christian Bruyere based his play and subsequent film of the same name, Walls (Talonbooks, 1978), on the 1975 hostage-taking incident in the B.C. penitentiary which resulted in the death of prison worker Mary Steinhauser. The play premiered at the Vancouver East Cultural Centre as a New Play Centre and Arts Club Theatre production on May 5, 1978 directed by Jace van der Veen. It featured Winston Rekert in the lead role of hostage-taker Danny Baker and Susan Wright in the lead role of Steinhauser. Bruyere later became active as a Vancouver-based film producer.